Max Ernst - His Work & The Women

The German artist was the leader of the surrealist movement. His unique artistic techniques made him a mentor and companion, as well as marrying an American art collector, then another surrealist artist.

The French writer Andre Breton used and promoted the word 'surrealism' as a 'truth beyond real'.

During the rise of fascism and the German occupation of France in WWII, Max Ernst was considered an 'undesirable foreigner' and arrested by the Gestapo.

His companion at that time was the surrealist artist, Leonora Carrington. Not knowing his fate, she sold the house and moved to Spain.

She was a British expat who lived in New York and then Mexico. I find her work quite remarkable.

Carrington's painting "And Then We Saw the Daughter of the Minotaur" (1953)
is based on the book "White Goddess", a family portrait with her two sons and a minotaur (representing her husband).

The artist escaped and fled to America with the help of Peggy Guggenheim who displayed his paintings in her London gallery. They were married in 1942 and divorced in 1946.

At that time his work reflected disaster, tragedy, and collapse. Another byproduct of the war for Ernst was paranoia. Some examples are: "Solitary and Conjugal Trees" (1940) and the "Eye of Silence" (1943-1944).

His work would take on an apocalyptic theme. Along with his fascination with birds, Ernst painted "After the Rain II" in 1942.

In the same year, Ernst exhibited a series of drip paintings, not heavily repainted. American artists Robert Motherwell and Jackson Pollock were influenced by his tracery of lines and adapted it to their own work.

Max Ernst is known for using two techniques: 'grottage', scratching wet paint with a sharp instrument and 'decalcomania', putting pigment on the canvas then laying sheets on top and removing quickly.

Dorothea Tanning worked as an artist, and after seeing an exhibit by surrealists, she began painting in that style, traveling to Paris. She also designed costumes for the ballet, including for Balanchine.

Her painting "The Birthday" (1940) shows a woman in theatrical attire beside a sequence of doors and deep space. She was married to Max Ernst from 1946 until 1976. 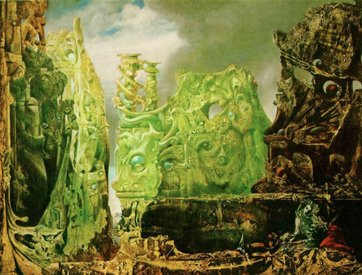 "Eye of Silence" by Max Ernst courtesy of Wikipedia

The Laurel in Art