German festivals and fairs throughout the year, but even more especially in the autumn and winter, and here are two recipes.

Homemade caramelized almonds, simple to make and tasting just as they would if they had been bought from a snow covered wooden chalet in a Weihnachstmarkt.

1 Place the sugar, vanilla sugar, water and cinnamon into a stainless steel pan. (Heavy bottomed preferably and not a Teflon type pan because the mixture will scratch the surface)

2 Combine thoroughly and without stirring bring to the boil over a medium heat.

3 Add the almonds and increase the heat while stirring continuously, with heat resistant spoon, while bringing the mixture back to boiling temperature and until the liquid is absorbed and the sugar looks "dry" with a sandy texture.

4 Return the temperature to a medium heat, stirring until the sugar begins to melt and starts to caramelize, coating all the almonds and giving them a shiny glaze.

4a...They can be taken out at this stage in which case go immediately to stage 5, but the sugar coating is hot so take care, however an alternative is to add a second sugar coating and make a thicker "lumpy" surface.

4b...Add the 75 g of cinnamon flavored sugar to the almonds and continue to stir making sure nothing sticks to the bottom of the pan, as the sugar melts and adds a further shiny but lumpy coat to the almonds.

There might be some sounds of crackling and this is the water content of the almonds escaping.

5 When the almonds are covered with the caramel turn them out onto a baking sheet.

6 Separate them quickly and completely with two forks, not with fingers, and allow to cool.

1 Place the almonds, sugar and water into a stainless steel pan, heavy bottomed preferably and not a Teflon type pan because the mixture will scratch the surface, and using medium heat bring to the boil.

2 Continue boiling until no water remains and the sugar has a dry sandy texture.

4a...Continue stirring over medium heat until the sugar mixture begins to stick to the almonds, giving them a glazed surface. This normally takes a further two to three minutes. 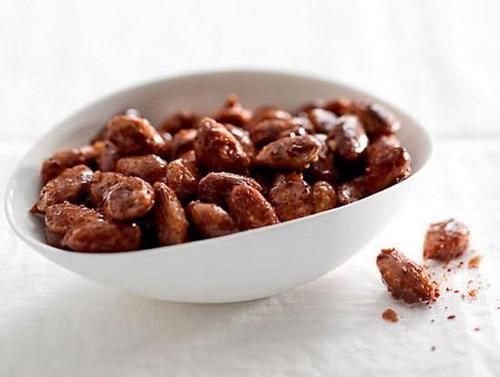 They can be taken out at this stage in which case go immediately to stage 5, the sugar coating is hot so handle carefully, however a second sugar coating can now be added to make a thicker "lumpy" surface.

4b...Add 75 g of vanilla or cinnamon flavored sugar to the almonds continuing to stir while making sure nothing sticks to the bottom of the pan. The sugar will melt and add a "lumpy" coat to the almonds. Any crackling sounds are just the water content escaping from the almonds.

5 Turn out onto a baking sheet or baking paper, do not touch with fingers, separate quickly with two forks and allow to cool.

Delicious while still warm, but not hot, as well as when cooled and crunchy. Definitely a calorie bomb but worth it, and wrapped in cellophane they make great little gifts or decorations for the Christmas tree.

Almonds are the most popular candied nuts but the recipe can also be used with the same quantity of Walnuts, Hazelnuts or Cashews, and after making the first batch the flavoring can be adjusted to your own taste with more, or less, cinnamon or with additional vanilla from vanilla pod seeds or vanilla sugar.