Rabbit A La Berlin, Life After The Wall Came Down 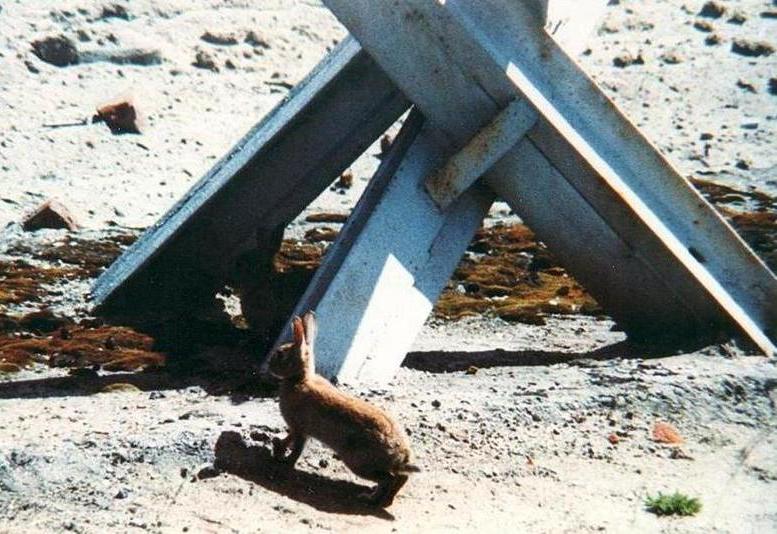 Rabbit A La Berlin weaves together "then and now" footage of rabbits and people into a parable for modern times. In German with English subtitles, for 40 minutes the movie examines the days of the cold war, and its after effects, from a different and fascinating perspective.

Colorful graffiti covered the surface of West Berlin's side of the Berlin Wall, which contrasted dramatically with the grey concrete Eastern side that, as there were soldiers and secret and non-secret police everywhere, no one would have dared to go anywhere near even carrying a can of any type of paint.

Much less actually use it.

From both sides it was impossible to miss the wall that ran through Berlin from 1961 until 1989, separating the city and symbolizing the partition of the East and West of Germany and Europe.

But there was another side to the wall, as a group of rabbits had lived in the area before the concrete went up. Not rabbits of the cuddly, and well fed variety because this was Potsdamer Platz, a central area of Berlin that had been razed to the ground during WWII and never rebuilt, so life for the rabbits, and any other wild life, was rather spartan. With the arrival of the wall these rabbits suddenly found themselves living in its shadow, trapped in what became 'no mans land'.

Although this meant they lost their freedom, such that it was in Potsdamer Platz, as the film shows their life style and standard of living improved enormously. It became a 'bunny utopia'.

What for any citizen who tried to escape from the eastern side of the wall was a grass covered death strip, for the rabbits was a paradise. Although they were the only ones able to freely enter the West, the guards were forbidden to shoot them, few bothered to leave the security, limitless food and lack of natural predators the strip gave them.

For almost 30 years the animals’ home, a 145 km (90 mile) strip of meadow ringed by barbed-wire fences and antitank barriers, was an oasis between Communism and capitalism. World dignitaries and spectators peered over the wall at the thousands of rabbits as they lived their seemingly idyllic life.

Shut in for their own good.

Towards the end of 1989 the wall came down and they were "free" once more, yet, as with many of the population from the former East Germany and Eastern Europe, their freedom came at a price.

Left to look after themselves, life, even survival, became difficult.

Together with some of the human population many of the rabbits chose to move to the West, where, unused to traffic, noise or searching for food, and with no natural caution, they were soon a delicacy not only for roaming cats and dogs but also people. Their numbers rapidly decreased. The few colonies of underweight, nervous animals that are shown scavenging in Germany's capital Berlin bear no relation to the population from the days of the wall.

Similarly the fall of the wall also required the making of, or failing to make, difficult adjustments for many of those from the former Eastern Bloc countries.

East Germany had been considered one of the most successful of the socialist states, with full employment, although it was not always possible to know what the employment was the people were both occupied and paid. Together with social and gender equality, an advanced educational system, low cost housing, transport network, easy availability of sporting activities, culture in all forms open to everyone, and security.

As with the Berlin rabbits freedom for East German citizens came at a cost. Almost at once jobs and job security disappeared, women who had always enjoyed equality found they no longer had it, the education system suffered because for various reasons teachers, lecturers, and academics were not allowed to work, the East German mark was re-valued destroying the export market, and, unable to compete against western competition, the heavily subsidized and often inefficient heavy industry and farming businesses collapsed.

Support structures of all types disappeared and in many ways a social breakdown took place.

Publicly owned assets were rapidly privatized and sold to whoever wanted to buy them, and many, just as rapidly, were shut down. Reasons given included that the workforce was not competitive, were naive, or lazy, all of which led to those in the East becoming defensive.

For the majority of the population not everything that had come from the GDR had been worthless, not everyone had been persecuted or victimized and, despite well documented problems, within certain limits life had been good. Not only in retrospect had their country and their former way of life more positive sides than bad.

Just as the rabbits had lived securely in their 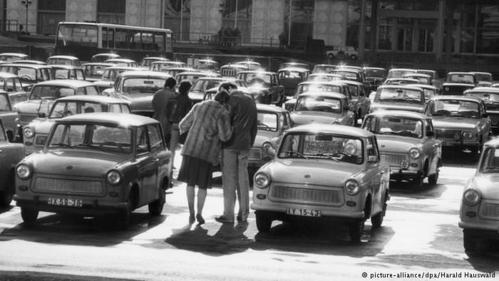 sanctuary within the death zone, generations of East Germans had lived in and experienced a completely different culture, and for them the 1990's became the time when adapting to a new system became a necessity.

Many did adjust and succeeded brilliantly, especially among the young, but many who were in their forties and older in 1989 never worked again.

At the time Chancellor Kohl of Germany had promised East Germany a future as a "blooming landscape", but for those no longer young, without the right opportunities, or without the flexibility necessary for change, it became an economic wilderness.

Obvious improvements have taken place. From beautifully designed buildings and thriving industries, to state of the art hospitals and motorways, but almost 30 years later average salaries continue to be lower, and unemployment higher, in the East.

Bartek Konopka, Polish director of 'Rabbit A La Berlin', said the film team were influenced by the problems experienced, and in many cases had not been overcome, by their own family members when faced with living in a post communist world.

His father, an engineer, never worked after losing his job and died having spent the last years of his life depressed, ill and living from state benefits.

In an interview Konopka said, "We are still trying to understand them, and our main motivation for making this film is dealing with our own history".

Catch it if you can. A DVD was released and it is still showing in some art cinemas and online.