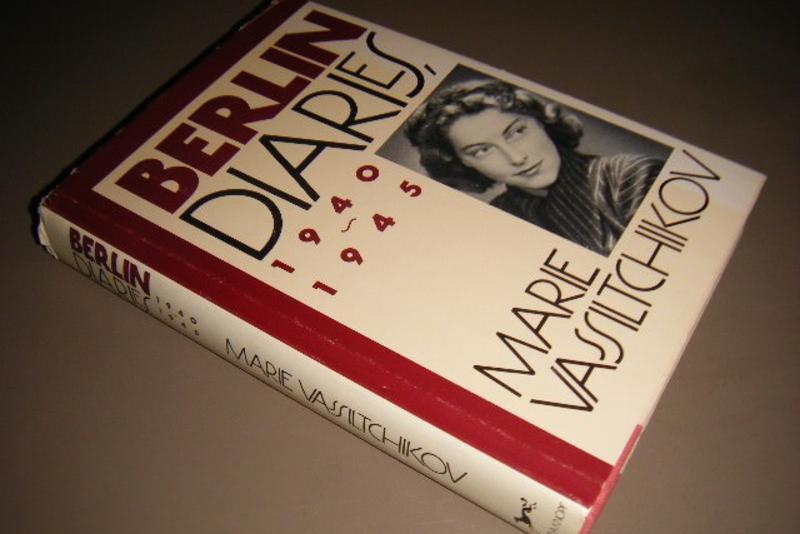 She was young, beautiful, spirited and related to the reigning royal families of Europe, a "White Russian" princess by birth, Marie Vassiltchikov?s first years had been filled with luxurious privilege, and in the company of those with influence and wealth in pre-revolutionary Russia.

Worlds away from wartime Vienna at the end of WWII, and the sick, starving, hospital nurse who, still classed as a "White Russian",

stumbled through the darkened city to avoid being found by the Russian army.

The Berlin Diaries 1940-1945 by Marie Vassiltchikov, an understated, stylishly and brilliantly written mixture of optimism and sorrow, is one woman?s personal, candid, and often ironically witty, observations of her day by day life in wartime Germany.

Missie, as Marie Vassiltchikov was known, wrote her secret diary in English shorthand on any paper available, against the background of one of the most tumultuous periods in world history, and it is a cleverly edited, and fascinating, mixture of autobiography and history.

Taking little more than books and a toy, in 1919 two year old Missie escaped with her family from the Russian Revolution, aboard one of the British naval ships sent by King George V of England to rescue his aunt, the Dowager Empress of Russia Marie Feodorovna, Tsar Nicholas?s mother, other aristocrats and their servants.

From this point on the families lives diverged dramatically from the lifestyle they had previously enjoyed, and she describes in her diary how, as aristocratic but penniless refugees, they traveled like gypsies from place to place around France and Germany for many years, eventually arriving in Lithuania where Missie?s father had property.

With the Russians on the march towards Lithuania the family had to flee once again. Together with her sister Tatiana she arrived in Berlin in 1940, as a stateless person with no employable skills but an urgent necessity to find paid employment.

Eventually they both acquired work permits and Missie worked for the Broadcasting Service during the period known as the "phoney war". Despite their personal hardships, the sister's network of well connected friends and relations helped smooth their path through Berlin life and also owned the necessary castles and estates for them to occasionally escape the city.

Consequently as well as mentioning the effects of the hostilities, the beginning of Marie Vassiltchikov?s diary also refers to the lack of real coffee and other "deprivations"; meals in well supplied restaurants, parties and balls in elegant hotels and the availability of oysters.

In many ways the conflict taking place did not seem to have much of a detrimental effect, at least not on her social life.

However this situation did not continue for long, and Missie kept her brilliant observer's eye open while adjusting to yet another change, not only in her own life style but in the world around her.

Some time, and "adventures", later, and thanks to her fluent English, she moved on to the German Foreign Ministry?s Information Office, the Auswertiges Amt, where she worked as an assistant to Dr. Adam von Trott zu Solz. A well connected Oxford educated Prussian, during the l930?s he had tried unsuccessfully to get both internal and foreign support for resistance against the Nazis.

Von Trott zu Solz was a Nazi party member only because this would enable him to access information and observe party planning. A hero of anti Nazi resistance, he was later executed as one of the masterminds of the Kreisau Circle, the group behind Claus Graf von Stauffenberg?s unsuccessful 1944 assassination plot against Hitler.

As were many others among those of Marie Vassiltchikov?s friends who had held influential positions within the traditionally aristocratic diplomatic and military world. The diary does not disclose how much she knew about the plot, this was her secret, but it describes in painful detail the terrible chronicle of punishments and acts of vengeance, including against the families and children, that followed.

Her account of living through the endless and devastating saturation aerial bombing of Berlin, its overwhelming and demoralizing effects on the city and its population, the shortages in virtually everything necessary for

life that affected all Berliners, the fire storms and the fear, leap from the page.

It was her ability to live in the moment regardless of what had happened which supported her, so it did not in any way detract from the horror and sorrow she felt at the tragedy taking place everywhere, and affecting those in her own life, that the day after the first bombardment, she picked her way through the rubble and chaos to check if a hat she had had made was ready for collection.

Missie?s wartime experiences ended in a battle damaged Vienna, a nurse in a hospital filled with war casualties but insufficient medical supplies and water, from where, undernourished and ill, she tried to escape the approaching Russians.

The concluding stages of The Berlin Diaries provide a brief but moving description of the terrible cost to ordinary civilians, not only of the war itself, but of the starvation and ruin that encircled Europe in the following years.

History, memoir, and autobiography woven together, it is filled with colorful characters, and when "Missie" began writing in 1940 she was interested mainly with boyfriends and parties. But by 1945 there were no more illusions. She has foraged for food, experienced the smell of death in the bombed out ruins of Berlin and Vienna, and lost some of her closest friends.

Marie Vassiltchikov was a talented diarist, she left us with an insiders personal perspective and insights into a period of German history from long ago, one that not only shaped our modern world but whose consequences are still felt today.