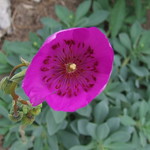 About a year and a half ago I impulsively purchased a plant I had never seen before. The vivid magenta flower at the end of an 18 inch stalk swayed in the breeze. The plant was a Calandrinia granidflora, or rock purslane. It is sometimes labeled Calandrina spectabilis or Cistanthe grandiflora. Within six months, the one gallon plant had spread to cover a three foot circle.

Calandrinia, a Chilean plant, is a member of the Portulacacae family. It is named after 18th century Swiss scientist Jean-Louis Calandrini. Its fleshy gray-green leaves form rosettes . Long flower spikes carrying several buds grow from the center of the rosettes. The poppy-like flowers open for only one day, but since there a multiple buds on each stem they seem to be blooming continuously from spring through the end of fall.

Calandrinias grow in the ground with almost no care at all. They seldom need watering and need trimming only to control their growth. If the flower spikes are cut off to the base of the leaves, the plant will produce more flowers.

This plant can be grown in a container but will have to be trimmed frequently.
It is somewhat frost tolerant – it reportedly can withstand temperatures down to around 20 degrees F. Calandrinias are easy to propagate, either by seeds or cuttings. If you wish to collect seeds, bag the flower heads so catch the seeds. Stem cuttings can be done as with other succulents – give the stem some time to heal or callous over and then plant it. You can also start a new plant by dividing the existing plant at the roots. They life span of the plant is said to be about five years, so having back-up plants started will help you keep your landscape full.

Although calandrinias spread out from their base, they are not invasive. They have no runners and do not easily self-sow. They are the right size to fill a parking strip and can be planted with other succulents or drought tolerant plants for an attractive display.