The building of a division across Berlin began on August 13th 1961, and from then, until the first steps were taken to break down the Berlin Wall in November 1989, it defined the cold war and the partition of Europe.

During the night of 12th to 13th August 1961 East Germany began to erect a wall across Berlin, effectively cutting off the East from the West. Morning broke, and Berliners were faced with the sight and sound of pneumatic drills tearing up the road in front of the Brandenburg Gate.

Hundreds of workmen, guarded by heavily armed East German soldiers, were breaking up streets, piling concrete blocks, and unrolling barbed the wire fencing that was pinned into the ground with industrial staple guns.

It is hard to imagine when seeing the Berlin of today. Europe's third

most popular tourist destination, a 'Green' playground covered by forests, parks, gardens, lakes, and in excess of 2,500 public green oases and recreation areas. A city with a 24 hour life style, more than 100 theaters, three opera houses, 100 plus concert venues, over 175 museums and art galleries, sports metropolis, shoppers paradise, restaurants and snack bars that cover the culinary world, and a dynamic diversity of nightlife.

With, for better or worse, an eventful history and endless opportunities for sightseeing or 'walking in footsteps'.

The building of the wall was just the beginning of another step in what has been Berlin's checkered past. Within days a 59 year old woman, Ida Siekmann, whose apartment was directly on the border, tried to escape and jumped out of her window in an attempt to land in the western side. The Berlin Wall had claimed its first victim when she died from her injuries.

She was the first of at least 235 East Germans who, while trying to escape, were either shot dead by border guards or otherwise injured and left to die at the Berlin Wall. It is not known exactly how many died when trying to escape through the mined, fenced and guarded border that ran between the two Germany's, but it is currently thought to be over 1,300.

Any windows with a view into the Western sector were bricked up, watch towers built, and border guards carrying Kalashnikov rifles, and orders to shoot to kill, patrolled, and controlled, the perimeter. As the years passed the wall became higher, more unassailable, increasingly threatening and more murderous.

What Russians regarded initially as a propaganda success proved, as time went on, to become a propaganda disaster. Symbolic of all that was bad about Soviet rule.

Lives were changed forever by the wall. People who had been visiting the Eastern Sector for just the night of 13th August and planning to leave in the morning were trapped, many had to remain in the East, often separated from family, friends and any jobs they had at the time, until the exits were opened and the wall spontaneously torn to pieces by the citizens of 'both' Berlins in 1989.

mother in the east that night, Guenter Litfin. The first person to be shot dead, on 24th August he tried to swim back to the west across the River Spree, which runs through the center of the city, and was shot in the back of the head.

After the Fall of the Wall most Berliners wanted no reminder of the days of separation. What could have been a memorial for future generations was dismantled, 99 per cent of the wall has gone with just a few miles left here and there, together with three watch towers.

However the course it took is marked on roads and pavements, with walking and cycling routes along its path, together with a reconstructed section of the wall and death strip with viewing platform, as well as a documentation and exhibition center.

The Berlin Wall East Side Gallery is a memorial for freedom, and the largest open air gallery in the world. A one and a half mile long section of the wall covered with around 106 paintings by artists from all over the globe, a tribute to the miles of original graffiti that covered the wall in the western sector, most of which has faded away.

Now it is difficult to put the two images together, the Berlin from then and Berlin of today, although the commercialization of the differences has in some areas of the former East Berlin given them the name Cold War Disneyland.

Checkpoint Charlie has actors dressed as Allied soldiers who smile and pose for photos where once the allies, diplomats and tourists crossed, cars in transit were searched for "escapees", and in 1961 Soviet and US tanks faced off, risking a third world war.

A privately run and commercialized Berlin Wall Museum is a city tourist magnet, with its permanent unkempt exhibit of old guns and examples of the most eccentric of escape attempts. While about 150 yards up the road is the Currywurst Museum just to add to the Disneyesque atmosphere.

Many consider costumed border guards in downtown Berlin to be an insult to the victims of 'The Wall' and everything it involved, while "Pariser Platz is deteriorating into the nation's fairground", is the opinion of an influential member of the German parliament, the Bundestag.

But there is a campaign to change and regulate the situation. A Cold War Center is planned to bring together Berlin's memorials and museums, focus on aspects of Germany's division which will give a wide-ranging view of its history, and cover different viewpoints and perspectives to avoid any impression of a victorious West. 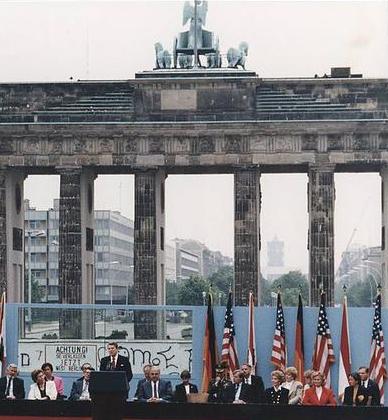 Just two and half miles from the Brandenburg Gate, the absolute opposite of "Disneyfication". Commemoration and commerce are kept separate at the Berlin Wall Memorial on Bernauer Strasse, the best preserved section of the old border. Together with the wall in its original condition, a signal fence, a watchtower and a secondary wall, it is a genuine historic monument to a time when there were two Berlins.

The Brandenburg Gate lay behind a wall encircling the free sectors of the city of Berlin, part of a system of barriers which at the time divided the entire continent of Europe, when on June 12, 1987 US President Ronald Reagan demanded, Mr. Gorbachev, open this gate! Mr. Gorbachev, tear down this wall!.

No one expected that a little over two years later this would happen.


Where President Reagan had stood, millions of visitors pass through the Brandenburg Gate each year, and the spot on which, 50 years before, barbed wire and pneumatic drills were the first signs freedom of movement was being taken away from millions, now costumed Darth Vaders pose for photographs and sign autographs.