Germany, its Neighbors and a New Image

Nine countries share Germany’s borders, it partners 26 countries in the European Union, and, although the USA and Soviet Union enthusiastically welcomed Germany’s reunification, at the time many of the country’s immediate neighbors were much less enthusiastic. They were in fact worried at what would result from unifying the country where, for over forty years, an imposed Allied military presence had become part of everyday life.

There is an old European joke describing country stereotypes in this small area of the world.

In Heaven: the cooks are French,
the policemen are British,
the cars are German,
the lovers are Italian,
and the whole thing is run by the Swiss.

However in Hell: the cooks are British,
the policemen are German,
the cars are French,
the lovers are Swiss,
and the whole thing is run by the Italians.

Although who knows if Hell in that case would be able to live up to its reputation, it would certainly be interesting.

The Goethe-Institut, DIE WELT and Deutschlandradio Kultur, conducted a joint survey to see if the image of a country filled with castles, beer, Lederhosen clad, Sauerkraut eating and somewhat arrogant and intimidating people, who build excellent cars, was still intact or had changed over the years.

What was the perception of Germany and Germans that their neighbors now held? To try and find out participants in eighteen countries, ranging from Belgium and Britain to Latvia and Turkey, were invited to give their opinions.

There were those who thought the BMW E21 Service Manual the best German book ever written, Scorpions Wind Of Change celebrating Germany's reunification the best musical piece, both powerful and evocative, while for some the tea bag is the most important invention.

Others believed David Hasselhof's popularity as a singer in Germany is inexplicable and a minus point against the country, while the flowers or evergreen plants often seen on balconies and in window boxes, summer and winter, were major plus points for German character.

However at the very top of the list of German Greats were Johann Wolfgang von Goethe, thought to be the absolute genius of German literature, together with the country’s Chancellor, Angela Merkel, described as an example for every woman.

While Albert Einstein, Kondrad Adenauer, West Germany's first chancellor and a key figure in rebuilding the country after World War Two, Martin Luther, Bach and Beethoven were also included on 'The List'. As was Hitler, albeit in a negative sense.

Grimm’s Fairy Tales were up there in the favorite German literature Top Ten, after Faust by Goethe in first place, while All Quiet on the Western Front from Erich Maria Remarque was also included.

As for favorite films it was Oscar winning 'The Lives of Others', by Florian Henckel von Donnersmarck, and the comedy 'Good Bye Lenin!' by Wolfgang Becker, that were the most popular, both of which dealt with different aspects of life in the former East Germany.

Beethoven’s Ninth Symphony was the favorite piece of music from any genre, the Brandenburg Gate and Cologne Cathedral were the most important buildings, although Neuschwanstein Castle was not far behind, and the inventions considered most significant did not include Toothpaste but were Johannes Gutenberg's Movable type and Wilhelm Conrad Roentgen’s X-Rays.

For those questioned the 1989’s Fall of the Berlin Wall was followed by World War II as the two most important historical events associated with Germany, while Nazism with Third Reich and the founding of the European Union took the bottom two places in the Top Ten.

Germany’s most disliked characteristics were an interesting selection. Number one was the cuisine, which really is much better than its reputation, the weather, and that is very different from region to region, aloofness, coldness and arrogance were high on the list, as were Nazism and lack of flexibility and spontaneity.

Although what is now most appreciated about the country showed just how far it has come in the last years, in the eyes of its neighbors and partners. 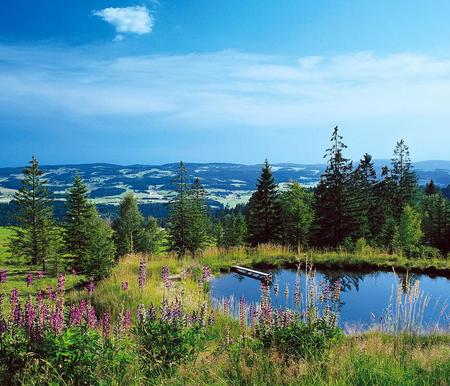 In first place was German culture, followed by friendly people, the language, despite the fact that it is not the easiest to master, nature and the countryside. German orderliness was in there, as were skills at organization, cultural diversity, the renewed city of Berlin, the architecture and Germany’s emphasis on the importance of the environment.

Over 13,000 people took part in the survey to give their views on the Germany of today, and, although national stereotypes or the judgments from its historical past have long been a part of general European thinking, and a source for clever jokes as well negative memories, it seems Germany is building a new image and replacing the one their neighbors have held for generations.

Eckhard Fuhr, Culture and Society correspondent for Die Welt newspaper, summed up 'The German List' when he commented, "The truth always lies in the eye of the beholder: here is what Germans can learn about themselves from their neighbors perspective."

Important to a country that, more than ever before, is sensitive to the opinions and viewpoints held by the ‘outside world’.


Map with European Union and Germany, via de.Wikipedia, Bavarian Forest via Germany Travel