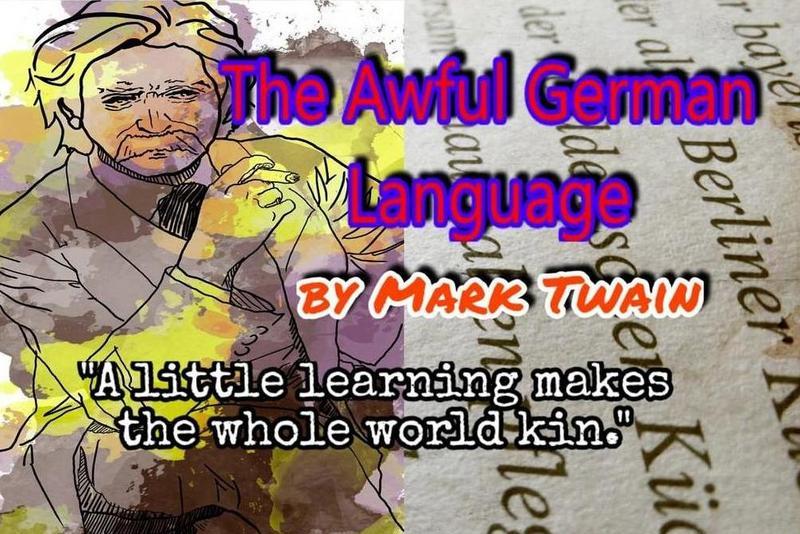 "I speak Spanish to God, French to men, Italian to women and German to my horse". So said Charles V the Holy Roman Emperor, who as Carlos I was also the first ruler of Spain, and by this made his personal opinion of the German language fairly clear.

The mother tongue of composers, inventors, scientists, artists, psychologists, philosophers and authors from Mozart, Gutenberg, Einstein and Hans Holbein the Younger, to Freud, Nietzsche, Goethe and The Brothers Grimm, among many others, has a reputation as being a language that few learn for fun, and none because it is easy.

It is not only the language of Germany and Austria but is spoken in Liechtenstein, Switzerland and Luxembourg, as well as regions of Belgium and Italy.

While not an easy language in which to become fluent quickly the basics are not difficult to assimilate, nevertheless Mark Twain’s "A Tramp Abroad", covering his travels with his friend "Harris", might be over 100 years old but its, The Awful German Language, a hilarious circa.1880 addendum about his struggle speaking and understanding German while in Europe, is in many ways as relevant now as it was then.

Especially to anyone determined to gain a firm foothold in the language of "The Land of Poets and Thinkers", because they sometimes find that, as he described it, "The inventor of the language seems to have taken pleasure in complicating it in every way he could think of".

Despite stating "How charmed I am when I overhear a German word which I understand", Twain explains his exasperation with German grammar in a witty series of examples.

For him these included "adjective declension", with its four cases: 'nominative, accusative, dative', and with 'genitive' added to the mix there are three grammatical genders: 'feminine, masculine, neuter', and the 'singular' or 'plural' nouns.

Together these can make for ever changing sequences that can baffle a non native German speaker into absolute speechlessness.

Hard to miss the compound words: where several

words are put together to make one, sometimes very long, word, or as Mark Twain put it "Some German words are so long that they have a perspective".

There is another masterpiece, 'separable verbs': where a prefix and its verb stem can be separated by a string of so many other words placed between them, that it is advisable to listen very carefully, otherwise there is a possibility of becoming totally lost in the sentence and completely misunderstand what is being said.

From Mark Twain’s comment on the German language that "There are ten parts of speech, and they are all troublesome", to:

"Every noun has a gender, and there is no sense or system in the distribution; so the gender of each must be learned separately and by heart. There is no other way. To do this one has to have a memory like a memorandum-book."

"In German, a young lady has no sex, while a turnip has. Think what overwrought reverence that shows for the turnip, and what callous disrespect for the girl. See how it looks in print -- I translate this from a conversation in one of the best of the German Sunday-school books":

Mark Twain’s despairing observations on the eccentricities of the German language not only ring true in many cases, they can also be "laugh out loud" funny.

A woman for example is a female; "die Frau", but a "female", "das Weib" is not, she has no gender and so is neuter; though luckily that word is not used as often now to describe a wife as it used to be in Mark Twain's times.

A fish is masculine, "der Fisch", but his scales are not, they are neuter, "das Schuppe". Then there are "das Auto"(n), the car, "der Zug" (m), the train, "die Schule" (feminine), the school. The list is endless, and as Twain said there are no logical explanations why any of this is the way it works, although luckily at least in some cases there are rules to follow that do make life easier.

Despite Mark Twain’s comment that..."As a gifted person ought to learn English (barring spelling and pronouncing) in thirty hours, French in thirty days, and German in thirty years, it seems manifest then that the latter tongue ought to be trimmed down and repaired."

"If it is to remain as it is, it ought to be gently and reverently set aside among the dead languages, for only the dead have time to learn it".

It is not difficult to understand his viewpoint although its a little pessimistic, as in fact learning something of the language can not only be an achievement but also fun.

The concept of culture is defined by many facets, which include history, literature, music, food, temperament, how emotions are expressed, how people speak, and German is one of the most important of the cultural languages.

Nevertheless not only those of us learning it as an additional language have problems, and it is in some ways very comforting to know that native German speakers also make mistakes. Would that qualify for "Schadenfreude", Schaden = damage + Freude = joy..... enjoyment obtained from the troubles of others?


Map of countries using German Language - Public Domain, Staatsverordnetenversammlungen - A Word as a Literary Landscape from A Tramp Abroad, Copy of Mark Twain self portrait from 1880 version of ‘A Tramp Abroad’ - Archive material, All courtesy de.Wikipedia