With the arrival of Autumn's colder days, and especially at weekends when there is more free time, the typical German breakfast, which traditionally is a mixture of bread and/or bread rolls, toast, boiled eggs, cheese, cold cuts, meat spreads and jelly, (known as Konfituere or Marmelade), will often give way to a warming Bauernfrühstück, a "Farmer's Breakfast".

Only the ever present coffee, tea, milk, hot chocolate or fruit juice remain.

Especially popular in Bavaria this hearty country style breakfast is just as "rough and ready" as it sounds.

A "one pan recipe", it is a good sized portion of roughly chopped potato, egg, bacon or ham and onions that is delicious any time, not only for breakfast but also brunch, lunch or even a quick and easy supper, and is now a favorite meal throughout Germany both on menu's and breakfast tables.

Wash and clean the potatoes but do not peel
Place in pan and cover with water
Add 1 teaspoon caraway seeds and salt
Allow to cook for 20 minutes
Drain and allow the steam to evaporate
Peel and chop roughly into pieces of about an inch, 2 cm. 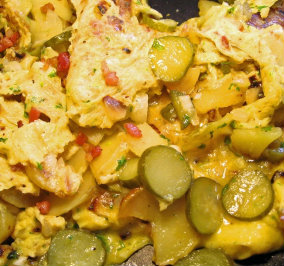 Take away outer layer from onions and chop finely

Heat the oil or butter in a large skillet, first heat the bacon through then add onions, but not the scallions

Remove these from heat and add potatoes to the pan, fry until crisp on both sides

Add a pinch of salt to the egg mixture, stir and pour over the cooked potatoes

Stirring distribute the eggs among the vegetables and bacon or ham

Cover and allow to continue cooking for 3 to 4 minutes, stirring occasionally

As soon as eggs begin to firm up, remove from heat. Do not allow the egg to cook through completely as it will continue cooking after you have taken it away from the heat, and will then become over-cooked instead of fluffy

You can flip one half of the potato and egg mixture over the other, slip it onto a large plate and return very briefly to the skillet uncooked side down to brown, or serve it as it is.

Garnish your Farmers Breakfast with the tomatoes and chopped chives


A German tradition, and often thought of a special treat, the Bauernfrühstück is basically a large breakfast hash of potatoes, and ham or bacon, with onions, and although it is delicious at any time the combination of potatoes and eggs give a good start to any busy and active day. 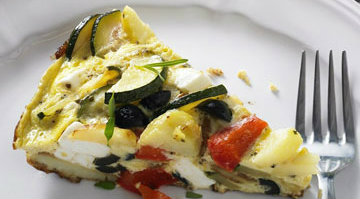 This is an original and basic recipe but there are all types of variations, from the addition of fried mushrooms and tomatoes to, for just those wonderful few weeks in the spring, wild garlic and other spring herbs, or in a completely different direction zucchini, feta and olives.

It is one of those recipes where your own imagination, taste and appetite, can take over.