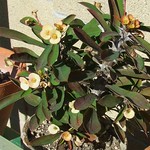 Crown of thorns is a succulent that looks like a cactus. Despite having rather nasty looking spikes, it is an euphorbia – Euphobia milli to be exact. It is named after Baron Milius who brought the plant to France in 1821. It is a native of Madagascar, but is now cultivated in many parts of the world. Like other euphorbias, it has a single stigma and one stamen. Like other euphorbias, it also has toxic sap.

Crown of thorns gets its name from the legend that the thorn laden stems of this plant were used to make the crown of thorns placed on the head of Jesus when he was crucified. Euphorbia milli was growing in the middle east at that time, and its stems are flexible.

Growing crown of thorns is fairly east because it seldom has pest problems. It is drought tolerant and should be allowed to dry out between watering. A balanced liquid fertilizer can be used to encourage growth but is not necessary.

Although crown of thorns can be grown in the ground where it can reach a height of six feet, it is also a good container plant. It is slow growing and does not need repotting often. Summer is the best time to repot. Unlike many other plants, crown of thorns can be planted deeper when it is repotted. It does best with a neutral or slightly acidic well-draining soil mix.

Crown of thorns will flower more if given more light. It loses its leaves when stressed by too much water or not enough water. The leaves will return when the problem is corrected.

The colorful parts of the plant that look like flowers are actually bracts. The flowers, which are in the center of the two bracts are very tiny. Over 2,000 cultivars have been developed with bracts colors in several shades of red, pink, yellow, salmon and white.

If you want to grow new plants, crown of thorns can be started with stem cuttings taken from the tips of the plant. After the cuttings have formed a callous they can be placed in a mix of pet and perlite and misted lightly. Roots will form after several weeks.