Warhammer - Mark of Chaos involves thousands of soldiers in a fantasy world clashing against each other. Elves, Goblins, Skaven and Humans battle it out for supremacy of the known world. 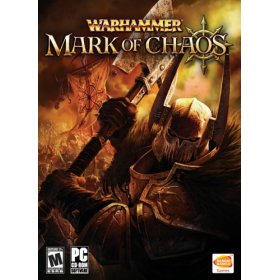 Before you even start playing this game, make sure you UPDATE it. It took us five tries to even get this game installed - the install utility kept crashing. We have a very new machine, too. There are countless tales of the gameplay crashing. If you do a full update - which can take an hour or more - you have the best possible chance of actually playing this game bug-free.

The graphics are gorgeous. You do need a high end computer to take full advantage of them, but you were due for an upgrade anyway, right? The elegance of the elves, the gritty darkness of the goblins, everything shows up with great detail and an eye for the cultures involved. When you're involved in the battles you can zoom out for a general overlook of the terrain, or zoom in close to watch individual soldiers duke it out.

The game is all about large scale battles. You choose what units you're going to send out against the foe, and then the battle commences. Think in terms of massive samurai battles with gigantic forces sweeping down against each other.

Speaking of samurai battles, you also get the one-on-one hero conflict that samurai warriors were so fond of. This gives you a break from the massive battle for a while, focusing on just one particular person, and the way he moves and swings.

Like most games of this ilk, the single-player gameplay is really more of a training mission than anything else. There are two, reasonably long (each perhaps a weekend of playing) scripted missions that help you learn the strengths and weaknesses of the various units. This helps you hone your skills against the enemy AI which isn't awful, but of course isn't great either. Then head into the one-player skirmish to test out the other maps and to set up situations to test your less-strong points, to get those worked out.

Once you've got those basics down, it's time to take on the real challenge - other humans!

Online gameplay is where all games like this shine. You're now playing against real humans, with real skills, ones who will spot your weaknesses and take cold advantage of them.

If you're a fan of epic warfare, of the likes seen in the Lord of the Rings movie and the 300, then this is definitely a game to check out. Just make sure your system is tweaked and that you download all the updates before you take it on!