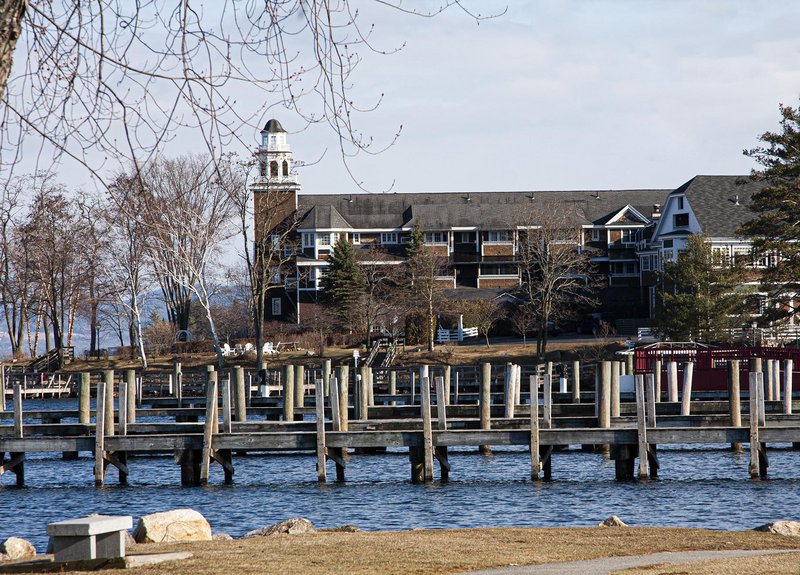 (Photo by Stillman Rogers)
With vaccinations and winter weather both behind us, we were ready for a spring getaway. While we usually head for the White Mountains or the Maine coast for our short breaks, this time we decided on New Hampshire’s Lakes Region.

Lake Winnipesaukee makes a big splash in the middle of the state, and around it are several smaller lakes: Squam, Wentworth, Winnisquam and others. It’s an area of lakeside summer cottages, family attractions, beaches and water sports, crowded in the summer, but quiet in the pre-season lull. Too early for beaches, but hotels and restaurants were open. Just what we wanted.

With all that water around, we wanted a room with a lake view, and chose one at Church Landing at Mill Falls at the Lake in Meredith, with a private balcony overlooking Lake Winnipesaukee. The resort consists of a series of lakefront lodges, and our room was in Birch Lodge, the last in the row. The corner room on the third floor had lake views in two directions. Views were maximized by large glass doors that opened onto our private balcony, and by the large window beside the double jacuzzi tub.

The large room had a king-sized bed and a spacious sitting area with a long sofa, a round table and a rustic stone fireplace that made the room seem more like a lake cottage than a hotel. Other decorative and architectural touches enhanced that feeling – a cozy window seat lighted by a wrought-iron chandelier in the shape of pinecones, birchbark facings on the bureau drawers, and a cathedral ceiling of whitewashed bead-wood. These details gave the room a cottage feel without overplaying it.

The wide balcony had the feel of a lake cottage porch and was furnished with old-fashioned porch rockers so we could savor the views in comfort. Below, green lawn stretched from the building to the rock-lined lake shore below, the lawn studded with groups of white Adirondack chairs and cushioned lounge chairs.

These touches of Adirondack style carried throughout the property. The covered walkway between the lodges is of cedar logs, and public spaces (the inn has several comfortable lounge areas, including a delightfully cozy library) create the same rustic-chic atmosphere.

In the central lounge area, a large stone fireplace dominates the interior wall, and over it a mural of a lake and mountains mirrors the view out the wide bow windows on the opposite side of the room.

Although the inn’s location between busy Route 3 and the lake might seem a bit tight, the architecture takes advantage of the sloping shore to give the inn a sense of seclusion, with rooms all on the lake side. Stairs with rustic log railings descend to the lawns below, and at the shore guests can step into the lake in a little sandy cove. Trees shade portions of the lawn, and in summer roses bloom along the shore.

Church Landing has a full-service spa, a fitness center and two indoor/outdoor pools overlooking the lake. In the summer, the inn has activities such as lawn games and s’mores by the campfire. An adjacent Activity Center has paddle boards, pontoon boats, and kayaks.

While it was too early in the season to enjoy any of these, we were within a few steps of the long lakeside park, which has recently become a sculpture garden. Contemporary works are scattered along the shoreline park and throughout the town, whose Main Street is a sort walk up the hill.

We were also within an easy walk of several restaurants, one in Church Landing itself. Lake House is one of the Common Man group, a locally owned series of restaurants we had enjoyed throughout the Lakes Region.

The evening we dined there followed a hearty lunch at Yankee Smokehouse (another local favorite) so we each chose something we thought was lighter than a full entrée. We were wrong – the sandwich of shaved prime roast with roasted onions, blue cheese and horseradish aoli was not only huge but so delicious that we each ate every bite.

Meredith, on Lake Winnipesaukee’s western shore, is only 7 miles from I-93, and makes a good base for exploring New Hampshire’s Lakes Region. In the summer, Weirs Beach, just south of Meredith, is the lake’s most popular family resort, with an arcade, a small beach and the world's largest video game museum. It’s also the boarding point for lake cruises on the M/S Mount Washington US Mailboat M/V Sophie C., as well as train rides on the Winnipesaukee Scenic Railroad.