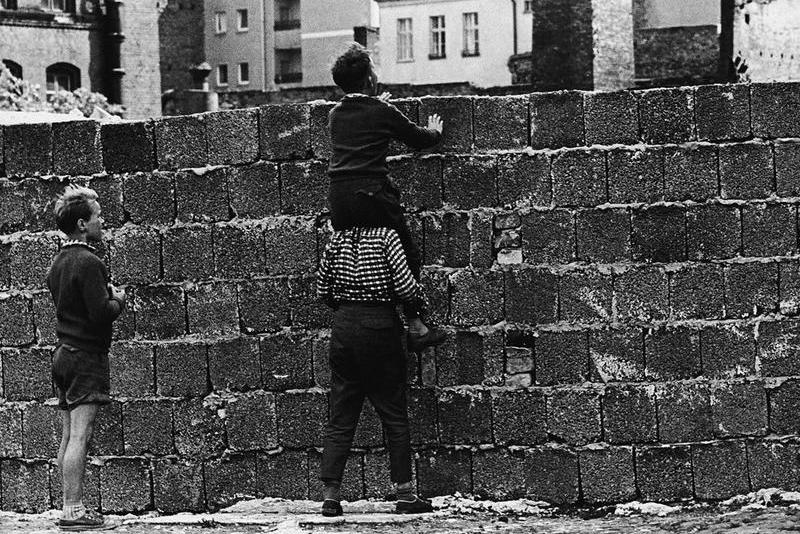 On November 9, 1989, the first steps were taken in the breaking down of the Berlin Wall, and an official reunification of the two Germanys was a year later, but they "Came of Age" in what used to be East Berlin long before the 25th anniversary of their unification. October 3, 2015, German Unity Day.

Before this could take place, for more than forty years from the autumn of 1949, there had been an East and a West Germany and in the middle of the Eastern sector, (the German Democratic Republic or GDR/DDR), was West Berlin. Part of what had been Germany's capital. A small independent area under the

protection of the French, British and USA.

Checkpoint Charlie became one of three checkpoints after the Berlin Wall was built in 1961, and from 1962 the only place where foreigners visiting Berlin could cross West to East and back.

Of course in retrospect crossing into communist East Berlin with my very young son's passport in my handbag was naive to put it mildly, but, as it was the first of what was to become many trips to East Berlin, this had not even crossed my mind.

Certainly it was the passport's discovery, while he was not with me but had chosen to stay with friends in the Western sector of Berlin, as it was "fun", which had led to an intensified checkpoint search, during which several thousand Singapore dollars, in unreasonably large denomination notes, were found in the large camera bag we used in those days for our lenses etc.

And they had been left there, unbeknown to me, by the friend who had borrowed my bag.

A compulsory purchase of DDR (East German) marks and accompanying declaration registering all currencies in my possession had already been filled in, of course with no mention of any Singapore dollars, so their appearance, together with the spare passport, meant that the already officious attitude of the border guards was suddenly open hostility.

Interrogation in a small side room, further searches, including through some of my clothes, and, as I later found out, strange anonymous phone calls to people in various European countries who were listed in my diary’s telephone index. The dollars were confiscated permanently, temporary confiscation of the extra passport followed and was returned when I went back through the checkpoint.

It took more than three hours before the guards were satisfied they were dealing with a tactless tourist not a major child smuggling criminal. Later I learnt

that passports had been used in this way to bring children out of the DDR.

All this time the German friend with whom I was visiting East Berlin, and who as a citizen of Germany had dropped me off at Checkpoint Charlie and then passed through the Heinrich-Heine-Straße crossing, had been repeatedly going backwards and forwards through the border asking at Checkpoint Charlie if a British person had gone through, to which the answer on both sides was always "No".

This was basically true of course, as the one who was trying to go through was in fact stuck in the middle. Was later told by a head representative of the UK Embassy in East Berlin that had I been found "guilty" I could have disappeared, and there would have been nothing they could have done about it...Yikes.

Nervous but nevertheless free, and without the suspicious passport, it was at last possible to step out into the shadows of the manned watch tower and adjacent bricked up buildings.

Past the people who I later saw so often on my trips through the border, just standing on the East side of the wall watching the traffic and people go through the checkpoint. Their only contact with the West.

Even the haze of Trabant exhaust fumes on east side of the wall could not conceal some cultural and architectural gems, nevertheless the drab apartment blocks, Stalinist architecture, still visible scars of World War Two, countless armed soldiers, poorly stocked shops, unwelcoming cafes and overall grayness, were a conspicuous contrast to the busy and successful Western Sector of Berlin of the time.

Another world just minutes away.

It would have been difficult to visualize a more obvious reminder of a divided city.

That was East Berlin of the past, but one that is now almost impossible to recognize, or even imagine.

Any return journey is made to a city where the dividing wall, a Checkpoint Charlie that was the opposite of its current Disneyesque incarnation, watchtowers, smog, and most signs of forty years of communist rule, no longer exist.

Renewed, and unrecognizable, what was dour East Berlin is the spirited heart of cosmopolitan and dynamic Berlin Mitte, center of unified Berlin.

The desolate and vast building site during most of the 1990’s is now an active, colorful and popular residential and commercial neighborhood, filled with creative and economic life. A vibrant, eclectic mixture of the historical and modern, cultural and artistic, and re-established as the hub of German government.

All those years ago it took only hours to explore what East Berlin could offer, now it would need an enjoyable few days.

Under communist rule many of the buildings, those that had survived the general enthusiasm of being torn down and rebuilt as examples of socialist architecture, were neglected to the point of ruin but nevertheless not destroyed, so beautifully restored they now juxtaposition with stunning contemporary architecture.

It is hard to imagine those GDR days, as it interweaves

present and historic past into a charismatic Berlin Mitte. Transformed.

The former East Berlin, capital of the German Democratic Republic, was a bleak neglected shell when exultant Berliners began to "Knock Down the Wall" on November 9, 1989, but now thrives in its freedom and renaissance. Although more work lies ahead, and construction sites are not a thing of the past, the city, and its people, have accomplished far more in the passing years than simply reclaiming a lost heritage.


You Should Also Read:
Fifty years of the Berlin Wall
Rabbit A La Berlin, Film Review
Ostalgie and Nostalgic Recipes