Lord of the Rings Online

Pretty much every fantasy computer game that exists owes at least some of its content to the famous Lord of the Rings series by JRR Tolkein. It's no surprise that there is finally an online MMORPG based in this world. 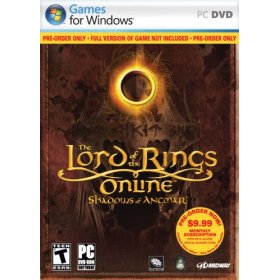 I grew up reading and loving the Lord of the Rings series. I dreamed of a world where Aragorn was by my side and we rescued the world from dangerous enemies. I would beta-test Asheron's Call, EverQuest and many other MMORPGs, always creating a ranger type character and giving it ranger-type names. These games would usually offer elves, dwarves and Lord of the Rings style situations - but it wasn't quite the same.

We now finally have a game which IS in fact the Lord of the Rings universe, complete with the well-documented maps and histories of this world. You can start as a human, dwarf, elf or hobbit. Each race has a single starting spot where it learns the ins and outs of adventuring before moving on to explore the larger world.

The character customization isn't as rich as in some other games on the market. Yes, you have a few hair styles, facial looks, and eyes to choose from. Depending on your 'home town', you get a selection of hair color, skin color and eye color options. I would have liked more level of detail to really make your character unique.

You get the normal types of classes - rangers, fighters, magic-users, singers. Each game seems to have these, by whatever name they happen to use. You can swim through water, hike through mountains, or simply sit on a hillside and watch the flock of birds fly slowly across the gorgeous cloud-filled sky. They really did do an amazing job with the graphics here. It's well worth amping your system and graphics card up to see the highest levels they offer.

You have to begin with all the usual quests - killing wild animals, fetching items. As you progress, you get to really customize the type of character you have. If you've got a musical instrument, you can play real songs you know! Fill the room full of traditional Celtic melodies!

Really, when it comes down to it, every MMROPG offers the same general environment. You have a character, you learn skills, you get better at fighting / spellcasting / crafting / etc. as you go. The key is in how much you enjoy being immersed in that world, and in how much you enjoy interacting with the people you meet. I know many people who loved staying in 'older' MMORPGs, with relatively poor graphics, simply because their band of friends was there too. Back in the "old days" I played on DuneMUSH, an online text-based RPG set in the world of the Dune series. We had no graphics at all! What made the game so much fun was the role playing and interaction of the characters that were online.

So that being said, since I love the Lord of the Rings series, I love being able to immerse myself in that world. It's like my two romance novels I wrote based on the type of characters that exist in Lord of the Rings. I adore that level of honor, compassion and moral courage. I would love to live in a world that offered that atmosphere every day. The Lord of the Rings MMORPG, details of crafting aside, gives me that opportunity - and draws in others who felt that same powerful draw of the books.

If the Lord of the Rings MMORPG serves as a gathering point for people who believe in the meaning of Aragorn and Arwen, in Legolas and Gandalf, and why their characters have such a powerful impact on our lives, then that alone is a great thing as far as I'm concerned. And if I did nothing but talk for hours with those people, discussing ways to make the world a better one and to help out those less fortunate, then that would make me truly happy.

Buy Lord of the Rings Online from Amazon.com