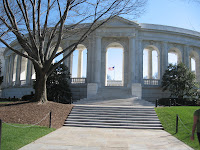 There’s something eerily commonplace about visiting the Arlington National Cemetery. The grounds are a place of remembrance and reverence, and tours of the grounds are in severe contrast to the cemetery walks visitors take in New Orleans. At the Arlington National Cemetery, visitors walk along paved, hilly, tortuous paths through the burial spaces of veterans from every American war. In addition to keeping visitors from trampling over sacred ground, the paths also help keep the cemetery green. It is a lush, verdant 624 acres of memorials and tombs.

The highlight of any visit to the cemetery is the changing of the guard. Every half hour from April to September and every hour from October to March, soldiers from the Third U.S. Infantry end their watch at the Tomb of the Unknowns with a sacred ceremony. During the guard changing, visitors are asked to refrain from talking and other noisemaking, though many do still take pictures. Crowds begin forming around the limited seating at the tomb at about 15 minutes before the ceremony starts. However, during the summer months when crowds are at their peak, the ceremony becomes standing room only. At one point, you will be asked to stand and as you do, spaces will further fill in. The upside is that unknowing visitors will often leave before the ceremony ends. 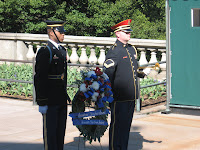 It takes the ceremony about 15 minutes from start to finish, and there are several pauses in between. To make it to the end, the key is to stand where you are, take in the silence, and be patient. A soldier’s actual watch of the Tomb of the Unknown consists of 21 paces each to the left and the right of the tombstone. Consider waiting until the guard has completed his paces one way at least 3 times before you leave. Only then can you be assured that the changing of the guard ceremony is over.

Another popular attraction at the Arlington National Cemetery is the Robert E. Lee Memorial, a restored house furnished with period pieces from the original Robert E. Lee house. This site draws throngs of crowds. If you go today, however, you’ll find only poster pamphlets of what the house will eventually look like. The house structure is currently under renovation and should be complete around 2011. In the meantime, according to Park Ranger Rich Moorer, some of the furniture pieces are on loan in Pennsylvania at the Friendship Hill National Historic Site while the remaining pieces are with a travelling “Lee and Grant” exhibition. 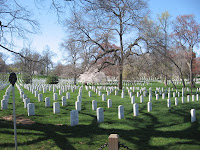 When you make your plans to visit the Arlington National Cemetery, you can do so by taking the Washington, DC metro to the Arlington Cemetery stop on the blue line. You can also consider taking one of the many tour buses in Washington, DC, that take you to the cemetery and allow you to hop on and off during the entire day. One caveat to using these buses, however, is that they are only cost effective if you can buy your ticket and begin using the service at the start of the day. Consider taking the metro instead if you are buying tickets for these buses after 1pm or so.