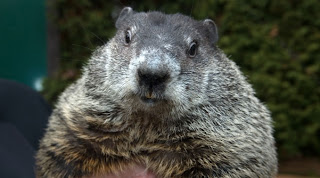 Groundhog Day is a centuries old tradition with its roots in Candlemas Day or the Festival of the Candles. There are many stories about the origin of this day, but one legend is that on Candlemas, the Catholic Church blesses all the candles it will use in the church in the coming year. That day, February 2nd, is also exactly 40 days after Christmas or the birth Christ, which coincided with that last day of a ritual purification that all new mothers, including the Blessed Virgin Mary, would have taken in the days of Jesus’ birth.

Another legend is that the day was a celebration of the pagan holiday Imbolc, marking the midpoint between winter and spring. It celebrated the increasing strength of the sun as days began to get longer. If the weather was mild on that day, it meant nastier weather would be coming before winter was over. It is from this legend that America derives its Groundhog Day.

The logic goes that if an animal were to see its shadow on February 2nd, it would mean the sun had been shining brightly. That would mean the weather was fair. German immigrants who came to America chose the groundhog as the animal to watch on this day. According to another legend, Phil the groundhog, was named after King Philip, and before that, he was called Br’er Groundhog.

You can visit Punxsutawney, PA, yourself this year to learn more about Groundhog Day, partake in the Punxsutawney celebration, and see Punxsutawney Phil up close. In the days leading up to the main event, the town of Punxsutawney hosts hayrides, art shows, tours, and more. There is something new to do each day.

On February 1st and 2nd, parking throughout Punxsutawney is free. To avoid traffic, you can also opt to take a shuttle bus. The site of the Groundhog Day main event happens at a place called Gobbler’s Knob. Shuttles to Gobbler’s Knob run from 3 a.m. to 6:30 a.m., and the fee is $5 per person or $10 per family. Pick up the bus at the following locations: