The restaurants featured here are some of Baltimore’s oldest and most legendary places to eat. These establishments have been around for a long time, serving generations of locals for 25 years or more. They are still around because what they offer are things that are hard to buy in a drive-through: excellent customer service, great taste, and history all at a modest price. 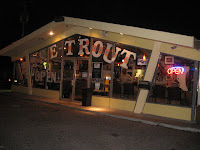 Located just blocks from Pimlico Race Track, The Rooster is a carryout restaurant specializing in lake trout dinners and sandwiches. In some circles, this meaty fried fish is also called whiting, but in Baltimore the locals refer to it as lake trout only. Accompany your fish with slices of white bread and couple it with side items from the Roost’s predominantly soul food menu. Parking is limited, but as an alternative to the pricey fare at Pimlico Race Track, a trip to the Rooster is well worth the walk.

Okay, yes, its name is derogatory, and it has gone without notice (or acknowledgment) for years. That bit of American history aside, Polock Johnny’s is a Baltimore icon. Once featured on the hit HBO cable television series The Wire (shot in Baltimore, pun intended), the restaurant specializes in hot dogs and, as you may have guessed, polish sausages. The last one standing is ironically located just off one of America’s oldest byways, Route 1. Stop by Polock Johnny’s on the way.

What would an article about Baltimore restaurants be without featuring one that specializes in its own version of Maryland’s world famous crabcakes? So, here you have Faidley’s, a small seafood stand inside Lexington Market, just within walking distance of Camden Yards, home of the Baltimore Orioles baseball team. For a budget conscious alternative to pricey downtown restaurants, stop at Faidley’s for an award-winning authentic, lump white-meat crabcake. And if you can’t make it to Baltimore yourself, Faidley’s ships all over the U.S. and Puerto Rico.

Every trip to a major city should include at least one meal a local hot spot. Think of it as a way to dig deep into the local culture if only for a moment or a couple of hours as you also take in a meal. Everyone needs to eat, right? So, why not eat at one of city’s legendary best. Here’s to good eating!