International Tatting Day April 1, 2017
It has been more than 25 years that the Online Tatting Class and I have been celebrating International Tatting Day with tatters from around the world. In groups large and small, in homes and school rooms, in conference rooms and online, tatters gather together on this day to share their love of tatting. We demonstrate the techniques and teach new tatters by the hundreds. This Saturday over 1638 tatters from just the Online Tatting Class have the opportunity to gather in the cyber classroom and share. Hundreds, perhaps thousands more tatters from many countries around the world will do so also. It is a quiet, friendly revolution spreading the art of tatting everywhere.

I wish I could tell you what tatters were tatting 200 years ago today but I can't. Tatting historian, Dan R.F. on his site lists this info:

The Lady's Assistant for Executing Useful and Fancy Designs in Knitting, Netting, and Crochet Work. Fifth Edition. Re-arranged and Improved by the Proprietor . . . Gaugain, Mrs. Jane, 3 volumes Edinburgh, 1840-46, octavo. 1842, vol. II p. 411 "Common Tatting Edging" p. 412 "If the Tatting has not been properly worked, this scollop (sic) will not draw. All Tatting stitches must be formed with the loop around the fingers."

But 100 years ago we know that Winifred Worth was publishing tatting booklets.

But, oh how the times have changed! Now in 2017 tatted jewelry is all the fashion! 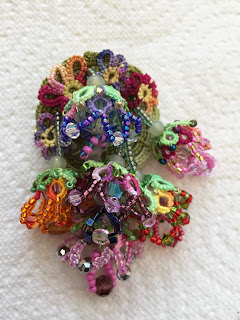 And beaded tatted lace is found everywhere, too. 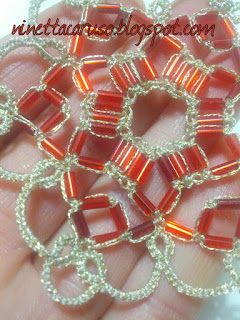 And patterns once new in 1917 are still echoed today.

And stacking shows up in Ankars jewelry, edging, pins and more.

I hope to hear from you sometime soon, either in the forum or in response to this email message. I thrive on your feedback! Have fun passing this message along to family and friends, because we all love free knowledge!

Georgia Seitz, Tatting Editor http://tatting.bellaonline.com One of hundreds of sites at BellaOnline.com