Back to Bilbao – A Lot More than the Guggenheim 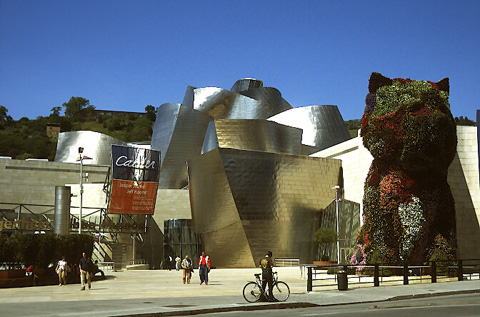 When I stepped off the bus in front of the Guggenheim Bilbao on a spring morning, it was love at first sight. That was several years ago, and it was time I returned to see more of this exciting city in Northern Spain.

The voluptuous curves and shimmering gold surfaces of Frank O Gehry’s masterpiece had changed my whole idea of what buildings could look like. I never thought I liked contemporary architecture, but Gehry’s Guggenheim made me a believer – and a fan. From that day on, I begin to seek out works by Gehry, Renzo Piano, Santiago Calatrava and other contemporary masters of architecture, and the journey has taken me to the far corners of Spain – to Valencia and Tenerife – as well as Boston, Seattle, Milan and Venice. It was time to go back to Bilbao for a second look, now that I had others to compare it to.

We flew into Bilbao’s new airport, itself designed by Calatrava, and went straight to our hotel, the Gran Hotel Domine Bilbao, located directly opposite the Guggenheim. Our room looked straight out eye-to-eye with Jeff Koons’ Puppy, a West Highland terrier sculpture completely covered in blooming plants. Part of the Guggenheim Bilbao’s permanent art collection, the overgrown (it stands two stories tall) Puppy guards the entrance to the museum, and has become another icon of the city.

We dropped our luggage and headed across the street for another look at the museum from all sides. I got almost the same thrill I remembered from my first sight of it, and this time I looked forward to being able to see it at all hours of day and night and from different angles – from the riverbank park, from the high bridge beside it, and from the hotel’s terrace at breakfast, as the first rays of morning sun caressed its golden titanium skin.

From the modern, we headed toward the oldest part of the city, the small settlement in a bend of the Nervión River, where the city began in the 1300s. We had two tempting routes to choose from – literally the high road and the low road. The latter followed the beautiful new riverside park with its wide promenades and views of the opposite bank, and the other along Alameda de Mazarredo, a street high above the river and lined with graceful buildings from the turn of the 20th century. We chose a bit of both, following Alameda de Mazarredo to where it opened out above Santiago Calatrava’s strikingly graceful Zubizuri walking bridge across the Nervión. We descended the long flights of stairs to the riverside and photographed the bridge’s sweeping white arcs and curves from every angle before taking advantage of the elevator back up to the Alameda.

Around the peaceful tree-covered Jardines de Albia we admired several Art Nouveau facades before crossing it to discover Café Iruña, a charming retreat from the same period, where we stopped for a pot of tea and some tasty little pastries to keep up our energy. From there we headed back toward the river and followed it to the Ponte Arenal, where we crossed into the old streets of the Casco Viejo – old town.

In the Casco Viejo’s streets we found a Bilbao literally centuries removed from Calatrava and Gehry. As we delved into its heart, we noticed tiles set into the stone pavement, each with the symbol of a scallop shell, and realized that we were walking another part of the legendary Camino de Santiago, the pilgrimage route of St James. Following these, we came to the cathedral of St. James, just as its bells began pealing. After seeing its carved stone portal and a peaceful cloister, we followed Calle Correo from Plaza Santiago, plunging into the origins of the medieval town. Here the houses still retain their historic balconies and shuttered porches that overhang the street.

All this walking meant that it was time for another stop, and Plaza Nueva was the right place for it. The entire large plaza was built in 1849, the buildings that completely enclose it all designed in a graceful neoclassical style. The ground floor all around it is an arcade filled with cafes that spill out into the plaza and we joined the locals in one of them, for a glass of wine and a plate of tapas, called pinchos here.

There was a lot more to see and do in Bilbao, and we would do many of them in the following days there – wander through neighborhoods to admire the architecture, dine on splendid seafood, drink Rioja wines, browse in shops and lose ourselves amid works by Goya, El Greco, Zurbarán, Sorolla and Richard Serra in the galleries of both the Guggenheim and the Bilbao Fine Arts Museum.

But we’d seen enough in our first afternoon in Bilbao to be glad we’d decided to return for another look at the Guggenheim.