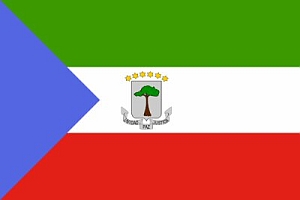 Flag: The flag of Equatorial Guinea has three equal horizontal bands of green (on the top), white, and red. It has a blue isosceles triangle with its base on the hoist side. The coat of arms is centered in the white band. The coat of arms has six yellow six-pointed stars (representing the mainland and the five islands) above a gray shield that has a silk-cotton tree. Below the tree is a scroll with the motto UNIDAD, PAZ, JUSTICIA (Unity, Peace, Justice).

National Anthem: "Let Us Walk the Path of our Immense Happiness"