The Story of the Peace Symbol 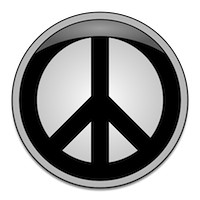 It’s so simple that a toddler can draw it: circle, line, two strokes in an inverted V. What a pity its meaning is so difficult to achieve.

How did it come about? Well, we can represent the events and players with the same four brush strokes. The circle is the Atomic Age, the era that gave rise to pacifist movements of the 1950s. Nuclear weapons have been used twice in war: on Hiroshima and Nagasaki in 1945. These ended World War II, but they threw open a Pandora’s box of weapons of mass destruction. By 1952, the Soviet Union also owned atom bombs, and the United States had created the hydrogen bomb, 500 times more powerful than the one that had killed more than 70,000 people in Nagasaki. The United Kingdom had become a third atomic power. It is here that the story of our symbol starts.

Aldermaston is a village of about 1,000 residents in southeastern England. It is the unlikely site of the Atomic Weapons Establishment (AWE, ironically). This is where Britain’s nuclear warheads are designed and built, even today. It was to this facility that, in 1958, the Direct Action Committee Against Nuclear War (DAC) led the Aldermaston March. This protest march is the vertical line that intersects our circle.

Starting at London’s Trafalgar Square on Good Friday, the march was to end at the weapons factory, 52 miles away, four days later. It was an ambitious plan for the small group. As organizer Pat Arrowsmith later told BBC News, the DAC “would have been happy if 50 people had turned up.”

On February 21, graphic artist Gerald Holtom turned up at the DAC’s London office. In our story, he is one of the lines in the upside-down V. He was responsible for what every protest needs: an emblem to be held aloft.

Despair or a butterfly?

Holtom later said he had drawn “a man in despair,” alluding to a painting of “Goya’s peasant before the firing squad.” Approving the design, the DAC had 500 “lollipops” made. The black-on-white ones, showing the church’s colors for winter, would be carried on the first two days. The white-on-green ones signified spring and would be held up on Easter Sunday and Monday. Holtom might have depicted despair, but the signs would emphasize life.

So many more than 50, or even 500, turned up. This was possibly thanks to the sponsorship of the Campaign for Nuclear Disarmament (CND), a larger organization co-founded by philosopher Bertrand Russell. In our story, the CND is the final stroke inside the circle, the key player opposite Holtom.

Some 10,000 participants turned out for the drizzly, chilly Aldermaston March. A Guardian article that Saturday characterized Holtom’s design as “a sort of formalized white butterfly.” Indeed, in the original image the lines spread out as they touch the circle, so they appear to outline a butterfly. This could be seen on ceramic badges worn by some protesters, which may have been what the news reporter was describing.

The lines inside the circle also happen to represent the letters N and D in the flag-semaphore system of communication. These stood for the groups’ common cause: nuclear disarmament. In fact, although most of the world calls it the peace symbol, Holtom’s design became the logo of the CND after the Aldermaston March. To enable other groups fighting for the same cause to use the image, neither he nor they claimed any copyright over it.

This is why the symbol has been co-opted for so many different ideals, some less noble than others. It can even be typed on a computer keyboard: ☮. In the 1960s, American activists used it in the civil rights and feminist movements, and to protest the Vietnam war. Thus it came to represent peace in general, and the hippie subculture to later generations. Critics of the counter-culture denounced the image as a satanic emblem, claimed that it represented a broken cross, and associated it with the Nazis.

Holtom even regretted the design years later, said Ken Kolsbun, author of the 2008 book Peace: The Biography of a Symbol. The designer apparently wished he had inverted his drawing so that the lines could look more like the cross – a sign of resurrection and hope. The right-side-up V shape is also the semaphore sign for U, so the three lines could stand for “unilateral disarmament.” This is what the CND demanded of Britain (and still does).

Not only that, but in The Third of May 1808, by Fransisco de Goya, the man facing the firing squad holds his arms up, not “outwards and downwards” as Holtom had described. Some people speculate he might have meant a lesser-known Goya painting, in which a peasant does stand in the gesture of despair, though not in front of a firing squad.

Whatever he might have wished, Holtom created an icon ingenious in its simplicty. Six more countries have joined “the nuclear club,” so our need for peace in the world is greater than ever. Like Holtom’s symbol, such a peace should be freely available, and yet it’s always open to conflict.