The Problem with Project Nim 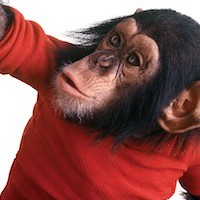 “Dog bites man,” says a rule in journalism, is not a news story – “man bites dog” is.

Newsworthiness aside, it’s word order that makes the meanings of these sentences different. In the 1960s, linguist Noam Chomsky argued that children understand such differences even when hearing sentences for the first time. The human brain, he said, comes with a “universal grammar” that enables us to recombine the same words to get different meanings.

Nonsense, said B. F. Skinner. A behavioral scientist, Skinner specialized in conditioning animals to respond to complex stimuli. He argued that we learn to construct sentences by gradually figuring out how different word combinations affect people’s behavior. Positive reinforcement, Skinner said, is what nudges us ever closer to correct grammar and precise sentences.

This was good news for animal-language researchers, who were teaching apes, our closest relatives on the evolutionary tree, to use human language. Apes lack the vocal cords necessary to produce human sounds, so they were taught to use sign language or visual symbols. The results, though questionable, were intriguing: yes, apes could form sentences after learning words. The most commonly cited of these studies featured chimpanzees Lana and Washoe in 1967, and Sarah in 1971. The most memorable, however, is Project Nim.

I first saw Nim Chimpsky at a film festival. Onscreen, in an award-winning documentary based on a 2008 book, Nim will not fail to win your heart – nor his story to break it.

Project Nim began in 1973, led by Herb Terrace. The Columbia University psychologist had been one of Skinner’s graduate students at Harvard. He thought the earlier studies relied too much on anecdotal evidence. With more reliable data, he believed, he could prove Chomsky wrong once and for all. He brought a week-old chimp from Oklahoma, and the creature was christened with a pun on the linguist’s name.

To be able to teach someone, you must form a bond with them. Enter Stephanie Lefarge, who had been Terrace’s own grad student. She was raising seven children when she adopted Nim, not only breastfeeding him but teaching him human traits such as wearing clothes and brushing his teeth. What on earth for?? “To encourage him to sign,” Terrace told New York magazine in 1979. “To motivate him to use sign language not just to demand things, but to try to please us, and to describe his feelings and his opinions.” It might seem over the top, but evidently there were reasons.

Indeed, at 2 and a half months, Nim signed his first word: drink. According to a couple of blog posts, this happened on February 4, 1974, but the date is neither included in the article nor documented in Terrace’s publications.

Whenever it happened, it was the first step toward the 125 words Nim would acquire during the short-lived project. By many accounts, it was also a shoddy project. Team members left the program due to professional disagreements, bedroom politics and other drama; and Nim had to re-bond with different caregivers. He was taught by more than 60 teachers – surely a terrible educational approach. This was due to scarce funding, a frequent circumstance in research, forcing Terrace to rely on volunteer teachers.

Imagine moving from your house, where you slept on a bed, and living for the rest of your life in a cage, sleeping on a cement floor. Nim was returned to his birthplace, but no matter how humane the Institute of Primate Studies might have been, the damage had been done. As Elizabeth Hess wrote in her book about the project, “returning chimps, especially those raised in species isolation, inevitably did fall apart.”

It was Bob Ingersoll who rehabilitated Nim for five years, teaching him to revert, to live in the company of other chimps. Then the institute, too, ran out of funds, and the chimps were sold to a medical laboratory. Fortunately, Nim was rescued before long and taken to the Black Beauty Ranch in Texas. He struggled with depression and aggression for the rest of his life, though he never had to move again. In 2000, he died of a heart attack.

The poster for Project Nim, James Marsh’s documentary, shows the chimp in a red shirt, reaching up like Adam toward God in the Sistine Chapel. It’s the same picture as on Hess’s book, the basis of the film. Pictures from the same photo shoot accompanied many articles published when the project was newsworthy. Yet Nim was bred for science, to be sent off once the experiment was over. He was a research subject, not this created child.

This raises the question: Was the language debate resolved, at least? Not even close. Nim made 20,000 word combinations, but the videotapes showed he was mostly imitating his teachers. His longest sign sequence was: Give orange me give eat orange me eat orange give me eat orange give me you. Long though this is, it’s nonsense, like “bites man dog.” Its meaning is clear in just the first two words. Therefore, Terrace was forced to conclude, Nim only learned words and formed rudimentary phrases. Apes cannot use grammar to construct sentences. Chomsky 1, Terrace 0.

Some ape-language behaviorists decried Terrace’s about-turn, not to mention his methodology. Nim didn’t form sentences, one researcher agreed, but “no child could under those conditions.” Terrace himself argued that, given “six to eight teachers to work with a chimpanzee for at least five years,” someone could still prove his original assumption correct.

So Nim gave his life to prove a negative result. In science this is a perfectly worthy cause, but in the popular imagination, it’s extremely distressing. I can barely reconcile this conflict, and that is the problem with Project Nim.

Look up the following to find out more:
“Can an Ape Create a Sentence?”, paper by Herbert Terrace et al. in Science (Nov. 23, 1979)
“How Nim Chimpsky Changed My Mind,” Psychology Today article (November 1979)
“Nim Chimpsky and How He Grew,” New York magazine story (Dec. 3, 1979)
Nim Chimpsky: The Chimp Who Would Be Human, book by Elizabeth Hess (2008)
Project Nim, documentary by James Marsh (2011)
“A tribute to my friend, Nim,” article by Bob Ingersoll on nimchimpsky.net


You Should Also Read:
Decoding Animal Languages
Do Animals Have Emotions?
Laika - The First Dog in Space