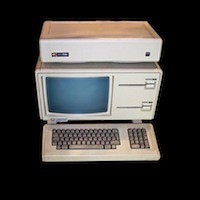 Slide to unlock, tap to open, pinch or spread to zoom. How easy is it to command our Macs and iPhones to do our bidding? We’ve come a long way since this:

That’s IBM PC talk for displaying a text file called “ReadMe” on the screen one page at a time. Zooming was not an option, and you had to know where to find that pipe character on your keyboard. (It’s above the backslash.) You had to know close to a hundred commands to use the IBM interface.

Thank goodness for the Apple Lisa, which made its debut on January 19, 1983. Apple’s fifth personal computer, the Lisa was the first PC to provide users with a gooey experience. That’s how you pronounce GUI, short for graphical user interface. No more verbal commands! We pointed, we clicked, we said hello to the WIMP system: windows, icons, menus, pointer. Instead of a black screen to type on, Lisa gave us a desktop and a trash can, and let us use a mouse! It was one small step to gestural commands.

So why was it called the Lisa? This is where the story gets interesting. Officially, it stands for Local Integrated System Architecture, whatever that means, but apparently that was a retrofitted acronym.

Lisa is the name of Steve Jobs’ oldest daughter, who was born in 1978 out of wedlock. He helped name her but then shunned her for years, according to his 2011 posthumous biography by Walter Isaacson. At 23, Apple’s ambitious co-founder had just had his first taste of success, and he didn’t want to be tied down. That’s why he got the marketing team to think up that meaningless backronym, supposedly. It took a court-ordered paternity test to get Jobs to pay child support, although thereafter he stepped up and funded his daughter’s education as well. He reconciled with her in 1986, and she graduated from Harvard four years later.

In the biography, Jobs admitted he should have done “a better job” with Lisa, and about the computer, he said, “Obviously it was named for my daughter.” However, some people have alleged that that is just a myth. Jobs was a major shareholder in the company, but he “didn’t have the power to name a project,” said a Lisa team member in Luke Dormehl’s 2013 book, The Apple Revolution. Lisa, some insiders joked, only stood for “Let’s Invent Some Acronym.”

It was Jobs, though, who led a field trip to Xerox, where Apple developers saw the GUI at work. So the innovative concept didn’t exactly originate at Apple, but it did inspire the Lisa team to “think different.” For one thing, Lisa started with software. An IBM PC was just a piece of hardware until a programmer designed an application for it. Lisa, on the other hand, was built to run the software that came with it, which included Lisa Write and Lisa Draw. This design philosophy is what Apple eventually became known for. Some developers even quit Xerox and joined the Lisa team. So, just like our version of the Little Mermaid is more Disney than Denmark, it would be Apple, not Xerox, that gave the world the GUI.

So where is the Lisa now? Why aren’t we queuing round the block for it?

Because it cost $9,995. Today, according to dollartimes.com, the price of one would buy you ten 27-inch, 3.3 GHz iMacs with Retina displays. Ten.

Why was it so expensive? Because all those graphics used up memory, and the Lisa had 1 megabyte of it. RAM chips get cheaper every year, but 1MB was 16 times the average amount of computer memory then. Also, even with all that RAM, multitasking on the Lisa often caused a crash, and the floppy-disk storage system (called “Twiggy” drives, after the British model, because they were so slim) was unreliable. Lisa was Apple’s top-of-the line computer. It was also their most expensive flop.

Still, they didn’t give up. The following year, Apple offered Lisa users a free trade-in for a new, improved version: Lisa 2. By that time, though, little brother Macintosh had arrived on the scene. It would outshine its sister and win over the world – but that’s a story for another day. In 1985, Lisa 2 became the Macintosh XL for all of three months before Apple finally dropped the entire line. They dropped 2,700 Lisas, in fact, into a landfill in Logan, Utah, reported the Herald Journal in 1989. This meant no more parts or servicing for the Lisas still in use, and they faded into obscurity.

It wasn’t as cute as the Macintosh – or as cheap to manufacture – but the Lisa made the Macintosh possible. Microsoft would copy the GUI to create Windows, which is now the world’s most popular operating system. And now that you’ve finished reading this article, isn’t it nice that you can swipe, or scroll or flick to the next one? Thanks to the Apple Lisa.