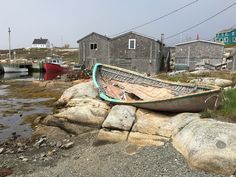 When speaking of Canada's Maritime Provinces, several iconic images come to mind. The first is undoubted of our fishing industry, a dangerous venture that has deep historical roots. Secondly, the down-home kindness American's called on during the sad events of 9/11 that became the Maritime calling card. Thirdly, images of beautiful and unbroken sea and landscapes mark the Maritimes as a tourist must-see.

The Maritime provinces of New Brunswick, Prince Edward Island (PEI), and Nova Scotia are small but long in Canada's history. The word Maritimes essentially translates into 'of the sea,' and it couldn't be more accurate than when applied to Canada's east coast. The roots of its inhabitants trace back to the early settlers who arrived after many arduous months at sea. The indigenous Mi'kmaq, whose land the settlers arrived on, were there to greet them. To understand our Maritimers, one must understand their hardiness and courage, their love of the sea, and the community spirit that swiftly calls these seafaring men home to the vibrantly colored houses squatting on their shorelines.

Atlantic Canada is home to a 15000 plus registered fishing vessels, compared to 2427 boats in the Pacific. That number speaks volumes to the integral part a fisherman's life plays in the east. Canada exports 75% of its sea harvest; the USA is our best customer and purchases 64% of our catch. This vital aquaculture employs 72,000 Canadians and makes our fisheries the eighth largest exporters of quality seafood to 130 countries.

The fisheries industry in eastern Canada is as old as the history of our early settlers. The first fishermen caught the catch off the Grand Banks on the shores of Newfoundland in the early 16th century and continued to supply Europe throughout the Napoleonic Wars. During the American Revolution, the British relied on fish from Canada's waters to feed their troops.

After WW2, the fishing industry experienced its own revolution in technology and adapted many tools from the Navy. Technology like sonar, communication equipment, radios, nylon netting, and efficient vessels abet today's fishing crews. Despite those improvements, fishing remains a dangerous job.

In Canada, the Department of Fisheries and Oceans set tight guidelines and procedures for fishermen to sustain a healthy marine ecosystem for our future generations. Certification and traceability are two critical factors in the management of a sound fishing industry. Climate plays a significant role in the fishing industry. As recent as 2012, during a marine heatwave, record-breaking lobster hauls broke the bank and lobster sold for as little as $2.00 per pound, making it impossible for fishermen to pay their bills. With this continued warming trend, the fisheries face constant peril. Climate shocks have an enormous impact on fish populations, which translates into fewer jobs and less income, although the job's danger does not diminish.

But if there is one thing that is a constant, it's that east coast fishermen love their job. It is in their soul and waterlogged rubber boots.

Americans not only love to eat Canadian fish, but they also love to visit Canada. Based on statistics, 2015, over 22 million American's visit Canada yearly. And the East Coast should be gracing the bucket list of must-see destinations.

While traveling through the small provinces (some American cities are bigger in landmass), make sure to visit the following highlights. The Confederation Bridge, which links Prince Edward Island to New Brunswick, is 8 miles long and the world's longest bridge spanning an ice-covered body of water.

In PEI, visitors flock to Green Gables Heritage Site, which is the inspiration for L.M. Montgomery's beloved story, Anne of Green Gables. Also very worthy of a stop is the Confederation Center of the Arts, PEI National Park, which provides a perfect seashore for a swim and gazes at the iconic lighthouse. Or there is Greenwich with its windswept sand dunes that are part of a fragile ecosystem very rarely found in North America. Confederation Trail is a great place for biking enthusiasts or visit the West Point Lighthouse, a working lighthouse, and inn.

In Nova Scotia, tourists come face to face with history. After the infamous explosion devastated the city, Halifax climbed from the ashes and emerged as a modern city. The Fortress of Louisbourg is located on Cape Breton Island, seeped in our French colonial history. Old Town Lunenburg is a picturesque mosaic of colorful houses against the deep blue Atlantic.

Of course, visitors to Oak Island get a friendly reminder they are on Canadian soil, despite the popular television show: The Curse of Oak Island, and its fame across the border. And eventually, exploring Cabot Trail, a 185-mile scenic trail around the island round out a perfect family vacation.