Mau Mau (rhymes with cow) is a term used to describe the Kenyans who fought against British rule in the 1950s for land and political freedom.  No one really knows where the term Mau Mau came from.  It was possibly used by the British to describe dissenters before the Mau Mau become a true movement.  One thing I remember being told was that Mau Mau had no real meaning but essentially meant "Those people over there." 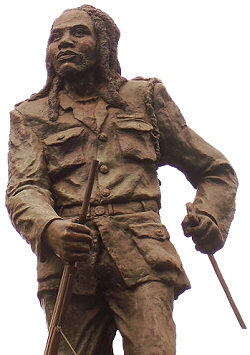 The Mau Mau movement began in 1946 and was a rebellion of landless peasants and low paid laborers.  Did you know that a Kenyan laborer was paid approximately one fifth of what a British laborer made?

The movement was largely made up of Kikuyu tribe members.  The Mau Mau was a secret society and a fighting force.  One of their goals was to kill Europeans and the African collaborators.  They were able to get supplies from a few sources:  through popular support of the people, forcing people to contribute even though they didn't support the cause, and theft.  The rebellion officially got underway in 1952 with a force numbering around 30,000 Kenyans.  Although, they didn't have much in the way of weapons and little financial support it took four years for the British to put down the rebellion.

The British declared a state of emergency that lasted until 1960. Kenyans were gathered up into 'protected villages' surrounded barbed wireand booby trapped trenches.  They were not allowed to leave during the hours of darkness.  If they were caught out after curfew a Kenyan would run the risk of being shot.  The British employed 20,000 Kikuyu tribesmen as 'home guards'  to help squash the Mau Mau rebellion.

A month after the Mau Mau rebellion began, Jomo Kenyatta along with close to 200 other Kenyans went on trial for being involved with the Mau Mau.  The case against Kenyatta was extremely weak.  Nevertheless, Kenyatta was sent to prison for seven years and was later released under house arrest in Lodwar - a very hot, dry, desert like area of Kenya.

The Mau Mau hid in the forests of the Great Rift Valley where the British evidently had a hard time flushing them out. The rebellion was finally crushed in 1956.  It took 21,000 paramilitary police, thousands of armed loyalists (British supporting Kenyans), and a full division of  British troops supported by the Royal Air Force with jets and bombers to accomplish Mau Mau defeat.


You Should Also Read:
Mau Mau Women
Kenya In Chaos After Elections
Masai Customs and Traditions