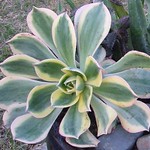 Aeoniums are succulent plants native to the Canary Islands and parts of central Africa. Several varieties have colors and variations that make them landscape favorites.

Aeoniums are often mistaken for Echeverias or other succulents with rosette shaped leaf clusters. One way of identifying a plant as an Aeonium is to see how the leaves are attached to the stem. An Aeonium’s leaves have a fibrous attachment that wraps around the stem. When the leaf is removed it leaves a line on the stem but does not damage the stem. When the leaf of an Echeveria is removed it takes a little piece of the stem with it, leaving an indentation. Many Aeoniums have slightly serrated leaf edges which also aids in identification.

Like other succulents, Aeoniums should be grown in well-draining soil. They grow well in containers because of their shallow roots grow near the surface of the soil. I had an Aeonium zwartkop which grew a stem over 12 inches long even though it was in a bowl shaped planter less than five inches. Aeonium leaves can be damaged by strong sun. They can withstand temperatures a few degrees below freezing, but they will do better if their containers are sheltered.
The growing season for Aeoniums is winter and spring. They are dormant in the summer when water should be reduced to avoid root rot. Summer is a good time to repot Aeoniums that have outgrown their containers.

When your Aeonium has grown too lanky the rosettes can be cut off about an inch below where they are joined to the stem. After the cut end has had time to dry – a few days is sufficient – it can be placed on the surface of your succulent potting mix where it will root. Aeoniums sometimes develop air roots along the stem. This makes propagation easy. If you have a variety that develops offsets along the stem, these also can be removed and used to grow new plants. Aeoniums are monocarpic, which means they die after flowering. If you continually start new plants you will always have some “waiting in the wings” to replace a plant that flowers.


You Should Also Read:
Echeverias