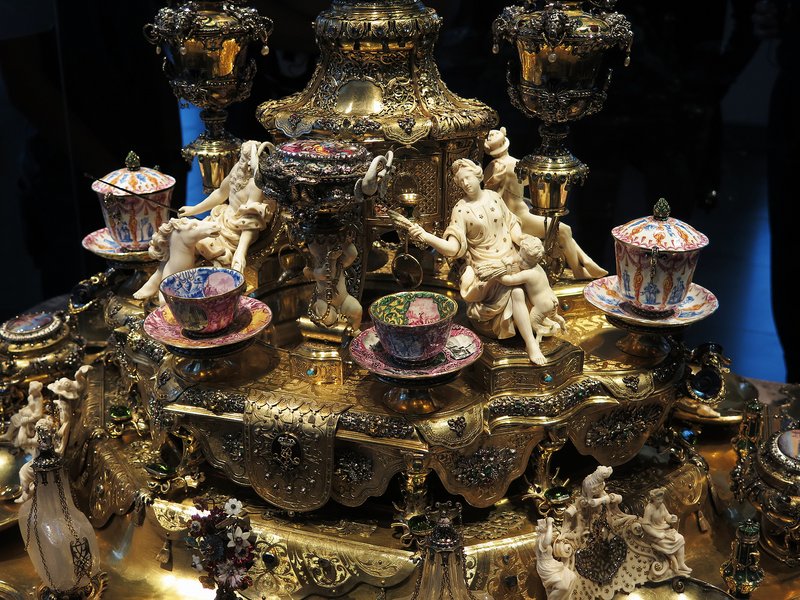 Augustus the Strong, who ruled Saxony in the 16th century, dreamed of making Dresden a “Venice on the Elbe” and set about creating a cultural center of lavish palaces and riverside prospects.

This was not our first time in Dresden, in the eastern German state of Saxony. We had stopped there for a day while on a cruise of the Elbe River, and were so enchanted by our brief look at its Baroque and Renaissance palaces that we wanted to return for a more leisurely look.

We began at the city’s most prominent landmark, the Frauenkirche, whose magnificent dome rises above the Old Town. This monumental church was completely destroyed in World War II bombing, and only re-opened in 2005, its restoration financed by contributions from all over the world. The original stones had been carefully sorted from the rubble and cataloged for placement and stored, so today’s church clearly shows the old stones among the new. The interior is breathtaking, with a carved and gilded high altar and tiers of balconies like an opera house, rising to the enormous dome.

Each day at noon the largest of the church’s bells tolls and a peace prayer is offered, followed by an organ concert. Throughout, the church’s message is for peace. “Germany started the war” a local guide told us, “and it came back to destroy us.” A sobering reminder to any nation courting war.

In the shadow of the church is Pulverturm an der Frauenkirche, a restaurant built into the foundations of a 1565 gunpowder tower, where we had dinner our first night in Dresden. The lively beerhall atmosphere and strolling entertainers added a dinner-theater touch to a meal of roast suckling pig and Konigskloss, a tender potato dumpling the size of a baseball.

We could have spent a whole day exploring Dresden’s Royal Palace and its museums. This castle had been the home of Saxony's electors and kings since 1485, and they had amassed enormous private collections by 1723, when Augustus the Strong turned the treasure chambers into a public museum. Along with being one of Europe’s oldest public museums, the Dresden State Art Collection is one of the most modern in its displays and interpretation. The highlight, the fabulous 14th- to 18th-century gold, silver, ivory and other priceless artworks of the fabled “Green Vault” are displayed in non-reflective glass cases that can be viewed from all sides without obstruction.

The original Green Vault, which was badly damaged in the war, has been restored in all its elaborate gory and parts of the collection are displayed there as they were in Augustus’s day. The rest of the collections are shown with equally brilliant curatorship. The Wettin royal family was a clan of packrats, keeping and carefully preserving everything from their opulent gold- and gem-studded silk Renaissance court clothing to the king’s garden tools (Augustus was, among other enthusiasms, an avid gardener). Labeling and detailed background information is in both English and German.

In the courtyard, once the scene of jousting matches, the rebuilt walls are again being engraved with intricate scraffito decoration, replicating the original Renaissance designs and techniques. An arcade with rounded arches leads from the Court Stables, and along its wall is a 101-foot-long history of the Saxon rulers made from 25,000 Meissen Porcelain tiles.

Dresden’s Old Town, where this and other palaces are found, overlooks the Elbe River, and Brühl's Terrace is the best vantage point for sweeping river views. Directly below is the Terrassenufer, where we later boarded a vintage paddle steamer for a river tour. First, though, we savored more views from the windows of Radeberger Spezialausschank over a lunch accompanied by their fresh draft Radeberger beer, an unfiltered cloudy Pils only available here.

Our hotel, Amedia Plaza Dresden, was perfectly located, halfway between Frauenkirche and the castle, in the heart of the Old Town. Despite the hotel’s central setting, our room was quiet and the large bright lobby opened into an inner courtyard that led to the café, where we enjoyed a bountiful breakfast buffet each morning. Not only were we close to all the top Dresden tourist attractions, but the hotel was handy to return to for a short break between sightseeing.