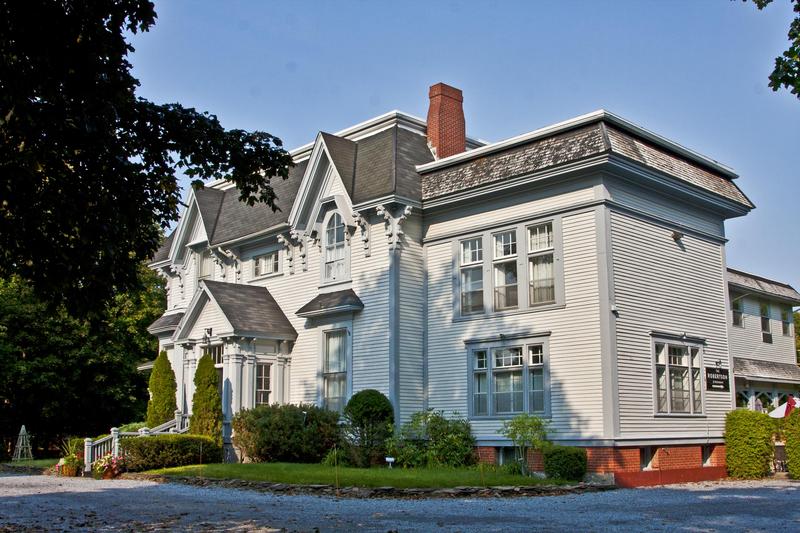 The late afternoon sun bathed the front of Shadow Lawn Inn in a rosy glow as we arrived in Rothesay, showing off every detail of its elegant architecture. Built in 1870 as the summer home of a department store owner from nearby Saint John, the late Victorian mansion retains its interior decorative details, as well, including several beautifully carved fireplace and mantels.

From the large foyer/reception area, a grand staircase ascends in two stages, and our room was at the top of the stairs at the front of the house. Sunlight flooded into the room, highlighting its deep moldings, echoed in the medallion at the center of the high ceiling. Deeply molded door frames and built-in bureau drawers were also white, set off by pale gray walls. The arch above the vanity nook was framed in carved swirls that combined with the round glass-and-chrome chandelier to soften the woodwork’s geometric lines.

Damask drapes in a dramatic stylized floral design in shades of gray framed the windows, which reached almost from floor to ceiling. The tufted velour wing chair, which picked up the medium gray shade of the drapes, invited curling up with a good book. Crystal reading lamps were set in alcoves at either side of the queen-sized bed, which was covered in high-count linens and a fluffy comforter. The crisp design of the furnishings paired against vintage architectural details gave the room a smart, contemporary feel.

The bathroom had a tub with shower, a pedestal sink and plenty of shelf space on the deep windowsill next to the sink. A large closet had a second set of built-in drawers.

We’d been in the car much of the day, exploring the beautiful (and surprisingly hilly) Kingston Peninsula, crossing the two rivers on little cable ferries and enjoying the rolling green countryside of southern New Brunswick. So we stretched our legs with a walk around the lovely park in the village center, admiring the gardens and outdoor sculptures before strolling back for dinner.

The inn’s restaurant, Robertson’s, is a dramatic contrast to the original house, a contemporary cathedral-ceilinged space surrounded on two sides by windows, so that the adjoining terrace and lawn become part of the otherwise minimalist décor. At one end, the focal point is a beautiful wooden bar, created from an original counter used in the owner’s department store.

The restaurant’s ethic is localvore, and the local ingredients are presented with panache, evidenced right from the start by our appetizers. Several different varieties of cherry and grape tomatoes were quartered and served with chevre mousse on a 15-inch rectangular white plate with chopped chives and black olive tapenade. The chevre flavor came through each bite, but the tomatoes were still the stars of the dish.

The meal continued in quality, with duck cooked just as ordered and silky caramelized scallops in a puree of Jerusalem artichokes. The frozen lemon torte was an elegantly presented semi-fredo, surrounded by a fan of marinated strawberries on contrasting coulis of strawberry and apricot. And my espresso was piping hot. The new restaurant at Shadow Lawn Inn is clearly in good hands.