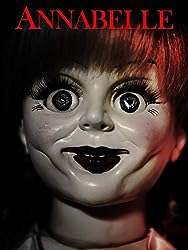 Mia and John are anxiously awaiting the arrival of their new baby. Things begin to change after two members from a cult kill their neighbors one night before arriving at the couple’s home and attacking them. After a mysterious fire at home almost kills Mia, the family, now with baby daughter, Lia, moves to an apartment, accompanied by a strange doll that they had previously attempted to throw out. As things progress and become more sinister, Mia begins to see images of Annabelle, the daughter of her former neighbors who not only was the woman from the cult that murdered them but died holding the strange doll that seems to be the cause behind the chaos. Despite the help from the family’s priest, Father Perez, and a close friend, Evelyn, it becomes apparent that the dark force haunting them is after one thing—a soul. Here are a few movie mistakes to look for while watching “Annabelle”.

∙ John gives Mia the doll as a gift. In the view of Mia putting the doll on the shelf, the doll at the end has its curly hair falling over its left shoulder. But, when it cuts to the closer view of Mia when she’s straightening Annabelle’s hair, the doll’s hair is pushed back, away from the shoulders. The scene cuts back to the original view, when Mia says “There, she fits right in”, and the doll’s hair is tussled again. It’s dangling over the doll’s right shoulder and on its front.

∙ When John brings snacks home, Mia put the jar of mustard on the table and proceeds to open the jar of pickles. She then dips the pickles in something while they’re talking. When Mia mentions “it’s only a couple of days, I’ll be fine”, she puts the lid back on the mustard, which she never opened.

∙ John and Mia are talking with Father Perez in his office. At the beginning of the scene, the statue is on the far left corner of his desk, facing toward him. It cuts to a close-up of the statue when he mentions “you survived” and Mia is moving the statue with her right hand. The status is now facing the opposite direction, toward Mia, when she pulls her hand back. The scene cuts back to the priest and the statue is once again facing him.

Get your copy of “Annabelle” here: