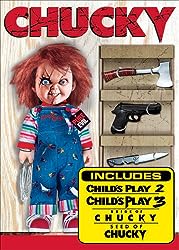 When Karen Barclay buys a doll from a vagabond on the street, she has no idea what’s in store for her family. After serial killer, Charles Lee Ray, is mortally wounded in a toy store by police officer, Mike Norris, he transfers his soul into the nearest object he can find, a Good Guy doll, and vows revenge against Norris as well as his own partner, Eddie Caputo. The doll, Chucky, seems quite harmless until Karen brings it home for her son’s, Andy’s, birthday. When a string of deaths start to happen pinpointing young Andy, he tries to convince everyone that the doll is actually alive before it’s too late. Here are a few movie mistakes to look for in “Child’s Play”.

∙ Mike holds up his gun before he enters the toy store and he’s shown wearing gloves. There is a view of the inside of the store and then it’s back to Mike who’s still holding the gun in front of him, but the gloves are now gone. A few moments later, when he shoots Charles Lee Ray, his gloves are back on and he can be seen taking them off.

∙ Andy is making his mother breakfast. When he first pours the cereal, there are six pieces that land in the plate in front of the bowl. In the view of the plate after he pours the milk, there is now more cereal.

∙ Karen is walking Andy to school the day after Maggie’s murder. In the wider view, when Karen says “Hey”, the back of Karen’s coat collar is raised. But, in the close-up view as she’s talking to Andy, the collar is turned down. It’s raised again in the next wider view.

∙ Chucky is in the back seat of Mike’s car, choking him with wire. Mike is using his left hand to pull the wire while driving with his right hand. The scene cuts to an outer view of the car as he runs into another vehicle and both hands can be seen on the steering wheel. It cuts back to the interior view and Mike is still holding the wire with his left hand.

∙ Also during this scene, on the inside of the car, Mike puts his feet up on the dashboard as Chucky is stabbing through the seat. In the outer view, when Mike yells “Look out”, the driver can be seen wearing a hat that Mike wasn’t wearing, and there are no feet on the dashboard. Back inside the vehicle, Mike’s feet are still on the dashboard and he then brings them down.

∙ Chucky sneaks into John’s apartment through the window and is on the countertop. The cabinets to Chucky’s right are all closed. But, when Chucky stands up and tells John “You got me into this…”, one of the cabinet doors is now open.

∙ CAUTION: May Contain Spoilers! Karen traps Chucky in the fireplace at the apartment and she and Andy light him on fire. In the front view of him, when he breaks out, both of Chucky’s shoes are off and are on fire inside the fireplace. But, as Chucky is crawling across the couch, both shoes are on his feet.

Get your copy of “Child’s Play” here: