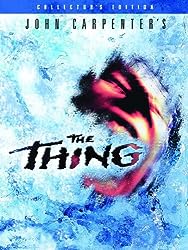 After an incident with survivors of a Norwegian research team and exploring their desolated camp, an American team stationed in Antarctica, becomes aware there is something sinister among them. As a shape shifting alien starts to infiltrate the team, killing and transforming itself into its host, it’s a race against time to stop it or to become one of its victims. Here are a few movie mistakes to look for while watching 1982’s “The Thing”.

∙ After the Norwegian has been killed, the close-up of MacReady shows the bottle of alcohol he’s holding in his right hand is covered with snow. He gets up and walks over to George and the snow is gone from the bottle.

∙ The men go in search of the alien spacecraft. in the wider front view, as they approach the cliff, everyone’s hood is down, except for MacReady’s. The scene cuts to an overhead view and everyone’s hoods are on. It cuts back to the original view and their hoods are down again.

∙ When MacReady is recording his message, the wider view of him shows him setting his glass on the plastic part of the recorder, just above the cassette, near the buttons. After he says “We’re all very tired”, it cuts to a close-up of him picking up the glass and it’s now positioned farther back on the tape recorder.

∙ CAUTION: May Contain Spoilers! Childs has an ax, trying to break down the door to get to MacReady. When he starts chopping, the ax marks are on the upper middle of the door. The marks are gone when he kicks the door in.


Get your copy of “The Thing” here: