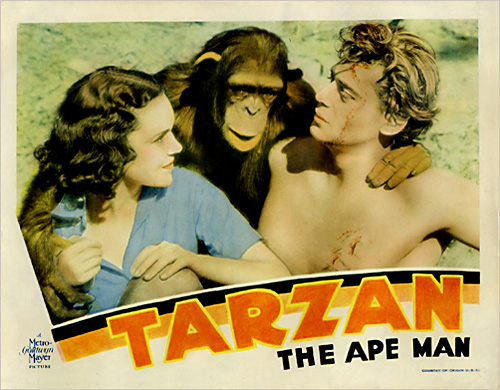 James Parker and Harry Holt have traveled to Africa on a quest to find the legendary elephant graveyard that contains enough ivory to make them rich beyond their wildest dreams. During a stop in the expedition, James soon learns his daughter, Jane, has traveled to the region with plans on joining them. The quest proves harder than they originally thought with several members of their team being killed due to the unfriendly jungle environment. Things come a head, however, when Jane is abducted by Tarzan, an unknown man who calls the jungle his home. While originally frightened by the man, Jane’s heart soon softens toward him. When Jane and the rest of the expedition are captured by a deadly tribe, it’ll be up to Tarzan to once again save the day. Here are a few movie mistakes to look for while watching 1932’s “Tarzan The Ape Man”.

∙ Jane arrives in Africa and is hugging her father. In the closer, side view, Jane’s right hand is shown around the back of her father’s neck. She slowly brings it down to his left shoulder. But, when it cuts to a closer view, her hand is on the back of his neck again.

∙ Cheetah first approaches Jane who is stilling on one of the limbs with Tarzan. Her right hand is holding Tarzan’s arm while her left hand is crossed in front of her, holding his leg. The scene cuts to a close-up of Jane and Cheetah and her left arm/hand is by her side.

∙ Tarzan is carrying Jane across the tree limbs. The hat she has been wearing is gone. But, when they get to the vine to swing across, Jane is wearing the hat again. When they land, it can be seen falling to the ground.

Get your copy of “Tarzan The Ape Man” here: