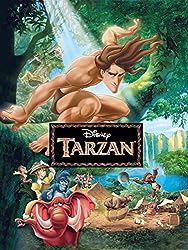 After his parents are killed when he’s a baby, Tarzan is raised in the African jungle by Kala, a gorilla mourning the loss of her own infant. Growing up in the wild, Tarzan only knows the ways of the jungle and in animals that live in it. However, that changes with the arrival of other people, including Jane Porter, who teach him that he is actually human. Here are a few movie mistakes to look for in 1999’s animated “Tarzan”.

∙ Kala is attacked by Sabor, the leopard, while trying to save the young Tarzan. During the attack, Kala receives two marks near her right eye. But, when she rejoins the other gorillas, the marks are now gone.

∙ CAUTION: May Contain Spoilers! Tarzan kills Sabor during a fight. He takes the cougar’s body and places it in front of Kerchak. When they hear the gun fire, and Kerchak says “Everyone, let’s move”, the animals are leaving and the view of the area shows Sabor’s body is now gone.

∙ Just before Jane is chased, she is able to grab the paper/picture and tucks it into the belt of her skirt. The paper is gone when she’s startled by the baboons and begins to back away. The paper remains gone through the entire scene, until she and Tarzan have reached safety. In the close-up side view, when Jane grabs the tree behind her, the paper suddenly reappears for Tarzan to take.

∙ When Kala first entered the hut when Tarzan was a baby, she stepped on the picture frame, and the glass is broken. When Tarzan enters the hut years later, he picks up the frame and wipes the dust off the front with no broken glass.