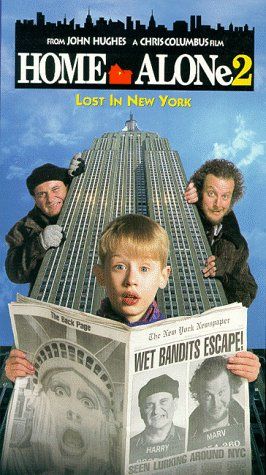 It’s Christmastime again and that means the McCallisters have another holiday trip planned. While they make sure Kevin isn’t left “home alone” again this year, the McCallister family isn’t exactly lucky when it comes to getting everyone on the plane to Florida. While lagging behind as everyone runs for the plane, Kevin mistakenly follows the wrong person and ends up on a plane destined for New York City. Kevin must use his mischievous instincts to not only survive the Big Apple but also to outwit his former nemesis, who have escaped jail. Here are some movie mistakes to look for while watching “Home Alone 2 – Lost In New York”.

· Kevin stops in the airport to replace the batteries in his recorder. The man in the coat like his dad’s is at the airport booth. There is an announcement that flight 226 to New York is now boarding and the man starts to run for the gate, with Kevin running after him. Once they’re seated on the plane and Kevin puts his earphones on, the flight attendant announces it’s “176 nonstop to New York”. A few moments later, the blip on the screen in the tower shows the Florida flight at the bottom, while the New York flight near the top. The flight number on the screen is 226.

· Kevin bumps into the airline employee at the gate in Chicago and drops his boarding pass in the stack she was carrying. A little while later, when he’s in New York, the boarding pass is now in his backpack and it’s eventually taken by Marv and Harry.

· Kevin throws bricks from the rooftop and hits Marv. The bricks bounce off and land on the sidewalk. When Marv attempts to get up when Kevin runs, the overhead view shows two of the bricks are now in the street behind him.