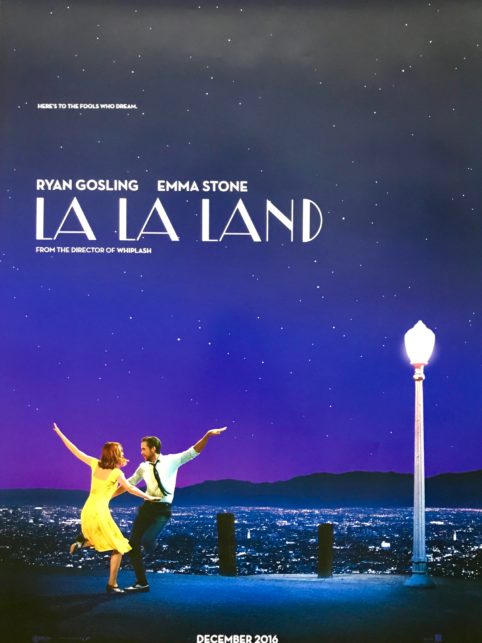 Mia works at a coffee shop on a movie production lot and auditions for acting jobs in hopes of becoming a renowned actress. Sebastian dreams of opening his own jazz club. After a disastrous initial meeting, the two finally hit if off. Will romance have to take a back seat to their Hollywood dreams? Here are a few movie mistakes to look for while watching “La La Land”.

· During the dance number at the beginning of the movie, there is a man wearing a blue shirt and black pants on top of the black car. Behind it is a man in brown with a baseball hat on top of the lighter AWD vehicle and a girl with green top and black leggings on top of the car behind that one. Everyone gets in their vehicles. The camera pans back and the black car is still there but the vehicles behind it are now Mia’s Prius followed by Sebastian’s car.

· Mia is walking to work and is wearing black pants, a white shirt, blue scarf and a yellow purse. Sebastian arrives to talk to her. As they’re leaving the coffee shop, Mia is still wearing a white shirt and has her blue scarf but she’s now wearing a blue skirt and carrying a red purse. In the far view of them walking, Mia mentions leaving college and she appears to be wearing her black pants. In the next closer view, she’s wearing the blue skirt again.

· Sebastian and Mia are at the club where Keith works. They finish dancing and walk over to their table where her drink with the red star and his beer (green bottle) are sitting. In the close-up side view, Sebastian picks up a piece of Mia’s necklace that falls off with his right hand. He has his beer in his left hand and starts to drink. It cuts to a close-up of Sebastian and it’s his right hand holding the bottle to his mouth.