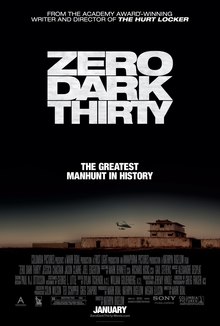 After the September 11th attacks, CIA operative, Maya, is assigned to a team to help extract information from prisoners by any means necessary. Over the course of several years, at the cost of becoming a target herself, Maya, despite the misgivings of some around her, tracks down a series of Al Qaeda operatives who she believes leads to their leader, Osama Bin Laden. Convincing her superiors to act on the information may prove a daunting task. Here are a few movie mistakes to look for while watching “Zero Dark Thirty”.

· Near the beginning of the movie, Dan is interrogating Ammar. They’re about to waterboard Ammar and Dan is showing putting black gloves on his hands. Dan says, “Let’s go” and walks over to adjust the ropes holding Ammar. Dan is shown wearing the black gloves. A quick view of Dan helping place the blue pad on the floor behind Ammar shows the gloves are gone.

· Dan and Maya are watching video footage of the Saudi Arabia terror attached. A close-up of Maya when she mentions Ammar has been in isolation shows Dan in the background with his hand rubbing the table top. Maya mentions they could tell Ammar anything and Dan’s hand is on the arm of the chair. It cuts to a wider view and both of Dan’s hands are in his lap.

· George storms into the meeting and tosses the coat he’s been carrying. In the close-up, when he first throws it, the coat lands over the table. The scene cuts to a wider view as he continues his rant and the coat is on the back of the chair.

· Dan walks into the Wolf’s office to ask for a couple hundred thousand dollars. Dan’s hands are in his pockets in the rear and front views of him. He mentions “forward…” and the scene cuts to a rear view of him where his right arm is down, with his hand out of his pocket. The Wolf asks, “where you going to get that?” and Dan responds, “From you”. The front view of him shows his hand is back in his pocket.

· The team is tracking the movements of Abu Ahmed. They pass him in a vehicle and take photos of him. In the vehicle, he’s shown holding his cell phone is his left hand while driving with his right hand. Both arms are inside the vehicle. A little later, when Maya looks at the photos, Abu Ahmed’s right arm is resting on the vehicle’s window.


Get your copy of “Zero Dark Thirty” here: