Pictured here are often used chain patterns. The double stitches and picots are carried on a ring or core thread from the shuttle or wrapped onto a rigid form such as the tatting needle.

1. A regularly tatted chain (needle tatting example, all picots are still on the needle.)

2. A chain tatted using the first half stitch only, also called an "S" chain.

3. A chain tatted using the second half stitch only, also called a "Z" chain.

5. A chain tatted in the maltese or pearl tatting fashion requiring three threads; no picots on sample.

6. A chain tatted in the maltese or pearl tatting fashion requiring three threads; with picots on sample.

Although formed in different manners, both shuttle- and needle-tatted split chains are useful both for design and construction. The split chain is just one technique which allows a tatter to tat from the center out or from row to row with unnecessary cuts in the thread. Popularized by Dora Young who was also the first tatter to ever receive a U.S. Patent for a tatting technique.

If you were suddenly asked if a chain could be made with only one shuttle thread, you might say no. Two threads are needed for a chain, right? Well, consider the single shuttle chain.

And a knotted chain may also be made with only one shuttle.

The essential difference between knotting and tatting is that the double stitch "slides" on the core thread of tatting while in knotting the core thread itself is manipulated to make a knot that is stationary. 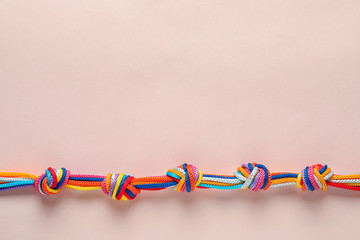