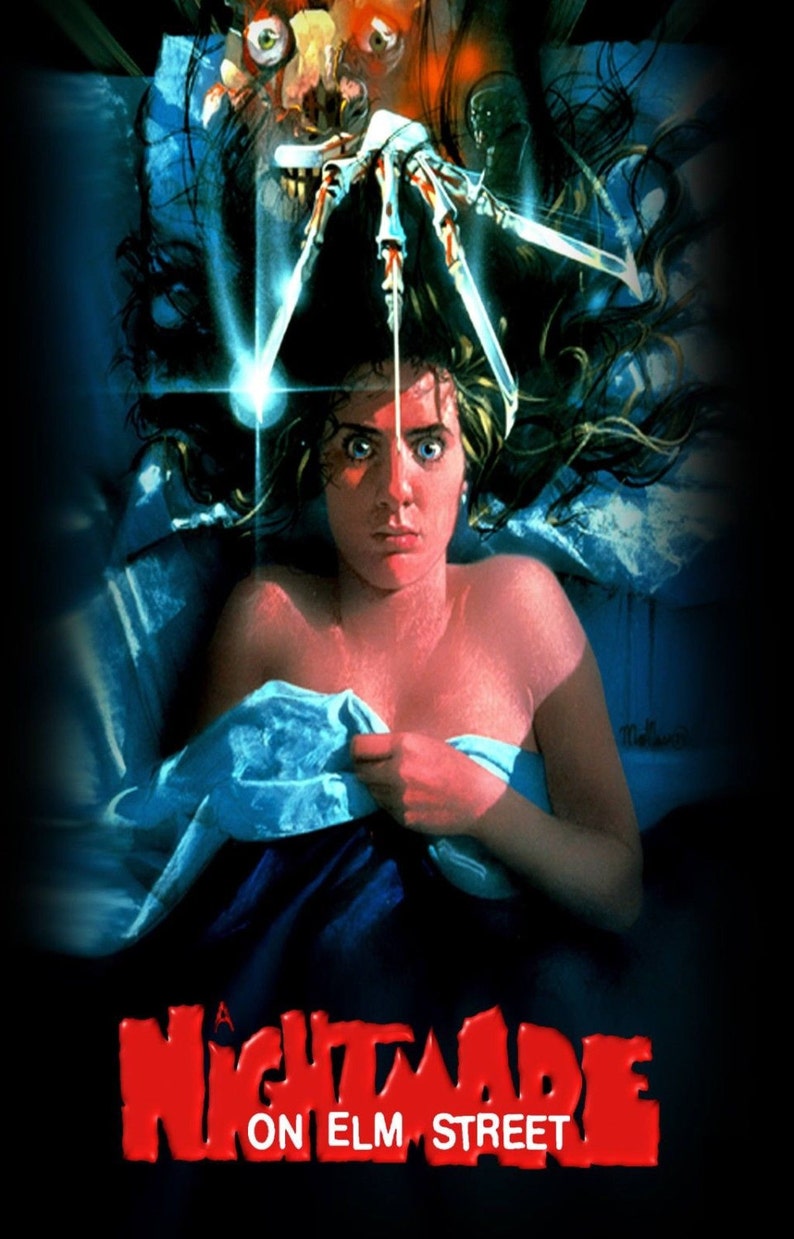 One, two, Freddy’s coming for you! Teenagers in a small town are picked killed by the vengeful spirit of Fred Krueger. Killed years before by the parents, Fred now picks off the teens one by one with his razor claws when they fall asleep. When Nancy figures out what’s going on, and realizes she’s next, she’ll venture into the dreamworld to beat Freddy at his own game. Here are a few movie mistakes to look for while watching 1984’s “A Nightmare on Elm Street”.

· The teacher is in the classroom, talking about Hamlet, and begins to walk around the room. She mentions, “according to Shakespeare”, and starts to walk between the first two rows. A boy with blonde hair and a light blue and white striped shirt is sitting in the front seat of the second row. A moment later, the teacher says, “John, can you go ahead, please”, and the boy from the second row now has a darker shirt with different designs.

· Nancy is soaking in the bathtub. In the close-up view, Nancy’s head is on the pillow, with the top part a few inches above her head. It changes views when she dozes off and the pillow has changed position, it’s now farther down. A few moments later, the pillow is back up, in its original position. Also, during this scene, after speaking to her mother, Nancy wipes the side of her face with a green wash cloth in her left hand. She starts to doze off again with her left hand and green wash cloth still near her face. It cuts to a different view and her left hand is down near her stomach. (The blue pillow is also down.)

· Glen is supposed to be watching Nancy but falls asleep. Nancy’s phone is next to him, on the table. As Nancy is trying to escape, Freddy comes in and the phone is on the opposite end of the table. Nancy and Freddy are fighting and roll off the bed, near Glen’s feet, and the phone can be seen back in its original position, on the table, next to Glen.

· Glen has climbed up to Nancy’s bedroom window. Nancy pushes the window up for Glen and puts it back down once he’s in the room. The window is open when Nancy’s mother calls her, and Glen runs out. Nancy proceeds to close the window again and pulls the shade down. Nancy calls for Glen after her mother leaves and the window and shade are both up.

· Nancy and Glen are on the bridge looking at the book about setting traps. In the front view, Glen is holding the book up and it’s half open. It cuts to a close-up of the book’s cover while Glen is talking, and the book is closed and near the railing. The scene cuts back to the original view and the book is open and elevated again.

· Nancy returns home where her mother has put bars on the windows and door. In the far view of the door as Nancy approaches, the bars far straight down. In the close-up of Nancy checking them, the bars on the door form an ornate shape in the middle.

· CAUTION: May Contain Spoilers! After Glen is killed, Nancy rips her phone out of the wall, wraps the cord around it and places it on her bed. The phone cord is facing left, toward the camera, with the phone at a slight angle. She walks to the door as the phone starts to ring. The view of the phone now shows its straight with the cord facing the opposite direction, away from the camera.

· CAUTION: May Contain Spoilers! Nancy is going to find Freddy after he kills Glen. As she’s saying her prayers, she’s shown wearing a short-sleeved nightshirt with a bandage on her arm. She looks at her watch to set the timer and she’s wearing a long-sleeved sweater, with the end touching the watch. It cuts back to the original view and she’s wearing short sleeves again.


Get your copy of "A Nightmare on Elm Street" here: