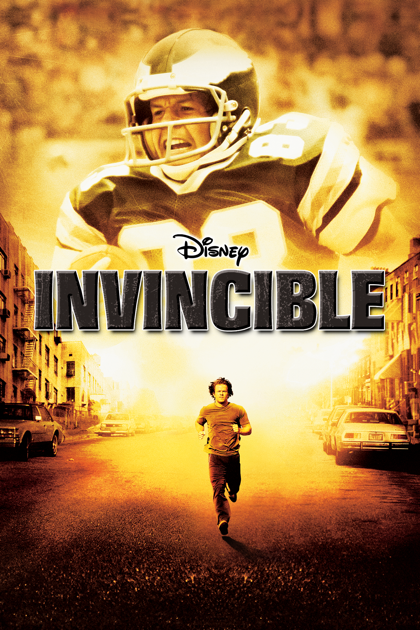 It’s hard times living in Philadelphia for Vince Papale who’s lost his job and his wife along with being a Philadelphia Eagles fan during a losing season. When the Eagles open up team tryouts to local fans, Vince, expecting to be sent packing, is surprised when he’s invited back for camp. As the weeks go in, he realizes his dream of playing for the Eagles as part of their team might come true. Here are a few movie mistakes to look for while watching “Invincible”.

· After the first day of training camp, Vince is sitting on the bench with his “locker” behind him. His yellow shirt and brown pants are hanging in the locker. A few moments later, when he’s being shown the room he’ll be staying in, Vince is wearing the shirt and pants. The scene cuts back to the other players looking at the note from hix ex-wife he left in the locker and the shirt and pants are still hanging there. It cuts backs to Vince in his room, wearing the same clothes.

· CAUTION: May Contain Spoilers! During the Giants game, Vince tackles #82 during the return kick. In the close-up on the ground, when Vince notices the fumble, he’s wearing his mouthguard. The mouthguard is gone when he grabs the football and starts running.

· CAUTION: May Contain Spoilers! Near the end of the mvoie, Vince makes the touchdown. In the front close-up as he raises his arms, #57 runs behind him and is just behind his left shoulder. The Giant’s #37 is running in front of #57. It cuts to a view of Vince’s friends in the stands and then back to him. #57 is farther back, still running up behind him. It cuts back to the original view and #57 is at his left side and #37 is nowhere to be seen.


Get your copy of "Invincible" here: