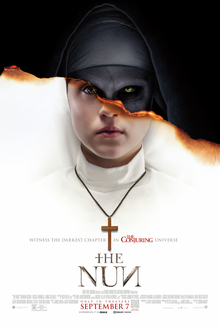 When a local man finds the decaying body of a nun at an abbey near a remote Romanian village, the Vatican sends Father Burke, a troubled priest who specializes in paranormal occurrences, and Sister Irene, known for her visions but who hasn’t taken her final vows yet. Upon entering the abbey, and encountering the sisters inside, the pair also come face to face with an ancient evil, in the form of a demonic nun, bent on destroying those within. Father Burke and Sister Irene soon realize not only are they dealing with evil forces beyond anything they’ve ever witnessed, but their souls are in the balance as well. Here are a few movie mistakes to look for while watching “The Nun”.

· Near the beginning of the movie, Sister Irene is talking about the dinosaurs to the children in the classroom. She takes a brush and puts red paint on the girl’s nose sitting across from her. Mother Superior is standing in the back of the room coughs. Everyone turns to look at her. The little girl turns back to face Sister Irene and the paint on her nose is now gone.

· Frenchie is delivering groceries to the Sisters at the abbey and is near the door of the ice house. The handle is on the right of the ice house door and the door is slightly ajar where it would open from the right to the left. A little later, when he brings Father Burke and Sister Irene to the abbey, the door now opens from left to right, with the handle on the left. A wooden beam on the door also goes from being diagonal, right to left, in the first view to left to right when he brings the others.

· Sister Irene is being attacked in the chapel while praying. The rear views of her show the white strap of her undergarments on her shoulder. In front views, the strap is down, off her shoulder.