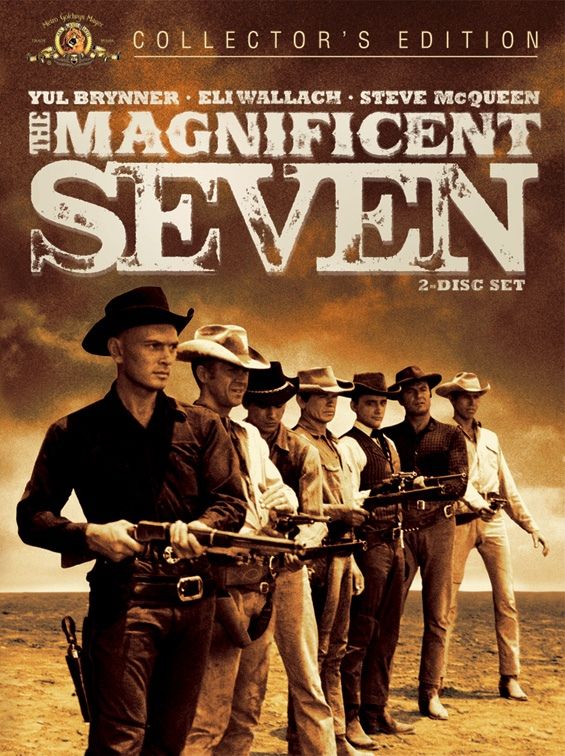 When a small village is terrorized by an outlaw and his gang, the citizens ask Chris Adams for help. Chris takes it upon himself to recruit the men needed to save the village from destruction. Here are a few movie mistakes to look for while watching 1960’s “The Magnificent Seven”.

· Near the beginning of the movie, Calvera and his men arrive in town and he goes to the tavern. Calvera mentions “religion” and he switches the cup he’s holding to his left hand and starts to take a drink. It cuts to a closer, side view of Calvera when he finishes drinking and he’s holding the cup in his right hand as he sets it down.

· A few moments later, Calvera gets on his horse to leave. A man runs out and Calvera shoots him twice in the chest. The man falls onto the dirt, and the back of his shirt is clean. A woman runs over to him and there are now two bullet holes and blood on his back.

· Chris agrees to drive the hearse to Boot Hill and Vin Tanner decides to ride along with him. They pass the Belmar House Hotel on their left. The hotel is in the background as the townspeople are shown following them. The scene cuts back to Chris and Vin when Vin asks, “new in town?”, and they are passing the hotel again.

· The train conductors are watching Britt and Wallace fight from the window of the train’s engine. They’re still in the window during the front view of Britt after he stabs Wallace. It cuts to a farther view and one of the conductors has moved to the platform at the end of the engine.