Fine Dining at The Old Inn on the Green 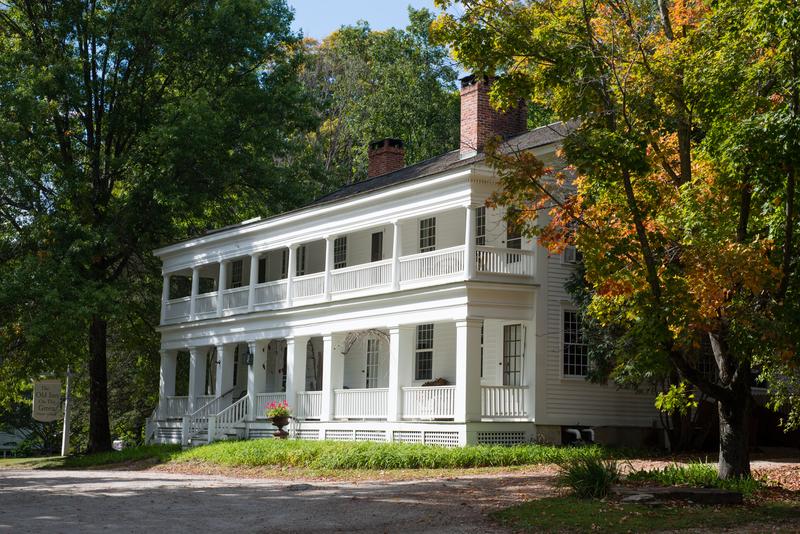 When The Old Inn on the Green, in the Massachusetts Berkshires, promises candlelight dining they mean it. Apart from candles, the only light in the dining room came from the blaze in the large fireplace that nearly filled one wall.

We felt as though we had stepped back through the centuries to the 1760s, when the inn opened as a stagecoach relay. Candles on our table and in the chandeliers above cast a mellow glow that was plenty for reading menus (which is more than I can say for the lighting in many new restaurants!) And it set the mood for a leisurely evening over food and wine worth savoring.

The dining room, often listed as one of New England’s best, may have been an eighteenth-century setting, but the menu was clearly 21st century. We had a lot to choose from: lamb, duck, pappardelle, steak frites, chicken breast, monkfish and more for entrees and appetizers that included foie gras, lobster risotto, and roasted butternut-ginger bisque. After a delectable little amuse bouche of roasted beet tarte tatin with chevre, I began with the bisque and could have ordered another for my entrée, it was that good.

My main course was slow-braised veal cheeks in red wine sauce, bursting with flavor and melt-in-the-mouth tender. My husband’s entrée of pan-roasted breast of duck with duck-fat-roasted fingerling potatoes was just as outstanding, the duck tender and cooked just as he requested. It was hard to resist the dessert offerings of sticky toffee pudding, flourless chocolate cake, and cherry cheesecake, but after those rich entrees we opted for the more restrained choice of a trio of sorbets.
We were staying at the inn that night, in the adjoining “newer” inn, built between 1825 and 1840, where our room was on the first floor, with its own door opening into the gardens. Although it had all the modern conveniences of a king-sized bed, good reading lights and a double Jacuzzi, the room retained many of its antique features -- wide-board floors, brick fireplace and a wall paneled in boards nearly two feet wide.

Breakfast began with a buffet whose centerpiece was a bowl of juicy fresh strawberries, blackberries, blueberries and raspberries; I was not bashful about helping myself to a bowl full, with the inn’s own granola. When we returned to the table there was a basket of fresh-baked scones, Danish pastries, crisp croissants, muffins and cinnamon rolls. We were offered a hot entrée as well, but I had no intention of letting those fresh pastries go to waste. I needn’t have worried: when we left we were offered a box to take the remainder with us. The pastries came from the Southfield Store, a bakery just down the road, where we stopped later for coffee and bought a bag of the inn’s granola.

We found a lot to do close to the inn. Nearby Route 7 is lined with antiques shops and co-operatives, where we could have browsed for hours among country furniture, wicker ware (one entire store specializes in it), fine silver, vintage linens and decorative accessories in styles ranging from colonial to mid-century modern. One shop is devoted entirely to Asian antiques, with a yard filled with larger-than-life Buddhas and even a small Japanese house.

In Stockbridge we basked in more nostalgia at the Norman Rockwell Museum, where we saw some of his iconic vignettes of Americana, including his Four Freedoms posters from World War II, and The Runaway, portraying a sheepish young boy and a good-natured policeman sitting in a diner. Displayed among his paintings are his detailed photos of models, charcoal sketches, preliminary drawings, and the published magazine covers.

There’s a lot more to see and do in the Berkshires: skiing in the winter, farm stands and music at Tanglewood in the summer, when the Boston Symphony Orchestra moves here. And you can be sure that when we return to sample these we’ll stay – and dine – at The Old Inn on the Green.