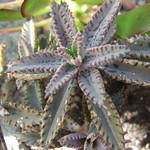 The oddly unique leaf structure of this plant caught my eye as I scanned the half-priced orphans in a corner of the big box store. Not only were the leaves variegated, there were tiny whorls along the edges of the leaves. This strange formation was enough to tip the scales in favor of making a purchase.

A quick internet search revealed that this plant is called Mother of Thousands. The tiny whorls I saw were plantlets, which will root and grow when they drop off the plant. Kalanchoe daigremontianai is its botanical name. Other aliases are Mexican Hat plant and Alligator plant. Some people who find it invasive call it Mother of Millions. It has been a problem in both Florida and Australia, where it spreads so much that it crowds out native plants and other desirable plants.

Kept in a container, Mother of Thousands is manageable. It makes a good houseplant if placed near a sunny window. It should be grown in a fast draining potting mix in a container with a drain hole. Like other succulents, it does not like soggy roots.

Mother of Thousands can grow to be three feet tall. Its leaves can be up to six inches long. Outdoors, this plant sometimes blooms in late winter. The plant produces clusters of drooping flowers which can be coral, pink or orange. Blooming is unpredictable and related to temperature. The plant usually dies after blooming, so new plants should be started if it looks like your original plant is ready to bloom. Indoors, it rarely blooms.

It is frost sensitive, so it will not survive snowy winters outside. However, since the plant is so easy to propagate, you can start new plants indoors in the fall and then replace any plants that freeze. Mother of Thousands can be started from the plantlets on the leaf margins, from leaf cuttings or stem cuttings. Care should be taken when handling the plant since it is poisonous when ingested.