Genji - Days of the Blade PS3

Genji Days of the Blade is probably most notorious for its silly E3 demonstration. The speaker talked about how it portrayed authentic feudal Japanese battles - involving Giant Enemy Crabs :) He also talked about novel concepts such as "attacking its weak point for maximum damage" and how you could do (gasp) REAL TIME weapons change in the game. This last item actually looks very silly - you could be swinging one sword, hit a button and MID SWING the sword changes into a new weapon. 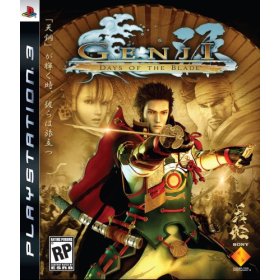 In general, this is a fighting game set in PRE feudal Japan, i.e. 1187. I ran a Feudal Japan newsletter for many years, and feudal Japan was the 1500s, the days of Oda Nobunaga and the wars then. Back in 1187, there was a quite different government setup. If you're curious about this time period, read The Tale of Genji sometime by Lady Murasaki - this is acclaimed by many as the first novel ever written. It was written back in the 11th century! It's a great read even today, which is quite an achievement.

So back to the gameplay. You play a young two-sword warrior and have as your pals an older warrior, a female warrior and a war-god turned spellcasting warrior :) You fight through various Japanese landscapes and settings, taking on the Bad Guys. You have your combat techniques and magical powers to help you triumph.

The graphics are very impressive. In the cut scenes, you can see the fabric weaves on the layers of kimono, the metallic sparkle in the lacquerware, the rippling heat waves by the fire. During gameplay the character movements were fluid and natural. Fabric pieces would sway and tiny, glistening sparks would float on the air. Some scenes were really quite lovely in a painting sort of way.

Gameplay itself involves slicing with swords, chaining up attacks and blocking. There are, a la the Giant Enemy Crab, situations where you have to Attack the Weak Point for Maximum Damage. I didn't like the HUD of the map in the top left - it took up too much space and looked "silly" in almost a PacMan kind of way. The top left HUD of characters and health was much better done, less intrusive.

For sound, I love Japanese culture and really enjoyed the traditional music that played in the background in many scenes. For me it really helped immerse the game in an authentic setting. Many of the characters speaking are obviously Japanese and hearing that accent and proper pronunciation of historic names was great. Some have British accents ... odd.

There were a lot of little details that I really enjoyed. Obviously these guys had done their research. The little click as a sword was reset into its scabbard, the traditional sword holders on the ground, the way the swordsmen would set up a stance and move, it was all really enjoyable to watch. In many ways it was like being in a well done movie. That all being said, they took a few liberties about what the buildings looked like, and the characters dressed like, back in 1187. It was more like a time traveller from the feudal Japan period (i.e. the 1500s) went back to 1187 in some cases :) But that's sort of like the movie Excalibur, where King Arthur and his knights were wearing armor from the 1600s England. Historic King Arthur certainly wasn't alive in the 1600s :) But we accept that anachronism as part of the myth. It's not like the Japanese soldiers in 1187 had magic powers, either.

In general I really love this game. If I'm going to pick out a particular flaw, it's the camera. You can't control the camera at all, and there are situations where it becomes incredibly annoying. Still, that's something you can just resign yourself to while you enjoy the game!

Note that there is no online component to this game.

Buy Genji Days of the Blade from Amazon.com

Screenshots from Genji Days of the Blade PS3