Imagine stepping back in time to the Spanish Inquisition where heretics were burned at the stake for not converting to Catholicism. What about Germany, in the 1930s and 1940s, detaining, imprisoning, and murdering Jews? Uganda is poised to go backwards in time if their latest anti-gay legislation passes. 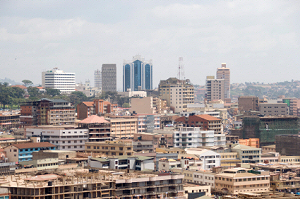 Uganda's capital city - Kampala
In parts of Africa, having children is of paramount importance. It is everything. In some instances, pressure is applied to couples who do not have children. Children take care of their elders; property is passed down to the children. In a lot of African cultures, women (and at times men) are addressed using the names of their children (I would be known as Mama Elizabeth in Kenya). To be a homosexual in this context is a curse upon that person and their family.

In Uganda, the majority of the population is Catholic with a minority of Muslims. Homosexuality in these religions is considered a sin.

These are the conditions in which a new crime category called "Aggravated Homosexuality" has been created in Uganda. In short, the current bill states:


* Anyone convicted of having homosexual relations would be sentenced to a minimum of life imprisonment.

* If the person is either HIV positive or a "serial offender," the death penalty is required (the favored method of execution is hanging).

* If someone knows of someone who engaged in homosexuality and does not report it to the authorities within 24 hours the penalty is three years in prison.

The current Ugandan president, Yoweri Museveni, is staunchly anti-gay and claims homosexuality is a "decadent import from the west."

If this bill passes in its current form, Uganda will become prime territory for anti-gay witch hunts, where just a word from someone could be a death sentence. Men and women who do not marry in a timely manner could be accused of being homosexuals. Are women, who do not bear children, going to be labeled as "lesbian" and thrown into jail?

Sweden has declared it will reconsider its developmental aid to Uganda if this bill is passed. Other countries sending aid to Uganda should do the same. The rounding up, imprisoning, and/or execution of a group of people based on their race, religion, nationality, or ethnicity is tantamount to genocide according to international law. This bill essentially legalizes the extermination of homosexuals in Uganda.