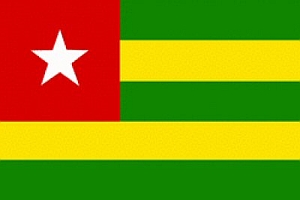 Flag: The flag of Togo has five equal horizontal bands of green alternating with yellow with a white five-pointed star on a red square in the upper corner.

National Anthem: "Hail to thee, land of our forefathers"

Administrative Divisions: Togo is divided into 5 regions - Savanes, Kara, Centrale, Plateaux and Maritime. These regions are subdivided into 30 prefectures and 1 commune.

Climate: Togo has a tropical climate. It is hot and humid in south and semiarid in the north.