Flags of Africa - Countries Starting With So - Sw

African countries have gone through many changes in recent history. This includes their flags. The current flags have elements that represent concepts and ideas important to that country. Each flag is unique in its own way. Below are the flags for the African countries beginning with the letter So - Sw. 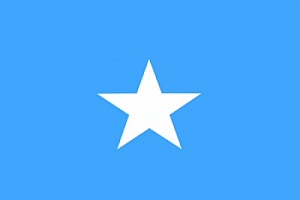 The current flag of Somalia was adopted on October 12, 1954. It was designed by Mohammed Awale Liban. Somalia's flag is light blue with a large white five-pointed star in the center. The blue field represents the sky and Indian Ocean. The five points of the star represent the five regions in the horn of Africa that are inhabited by Somali people: the former British Somaliland and Italian Somaliland (which together make up modern day Somalia), Djibouti, Ogaden (now Ethiopia), and the Northern Frontier District (now Kenya). 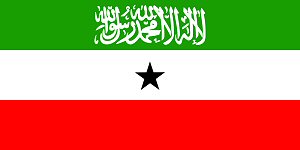 The current flag of Somaliland was introduced on October 14, 1996. Somaliland is an independent republic which is internationally recognized as a part of Somalia. Somaliland established its own government in 1991 and their self-declared independence is currently unrecognized by any country or international organization. 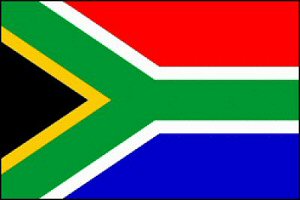 The current flag of the Republic of South Africa was adopted on April 27, 1994 to replace the flag that had been used since 1928. The new flag was designed by State Herald Frederick Brownell and was chosen to represent the new democracy.

South Africa's flag has two equal width horizontal bands of red (on the top) and blue separated by a green band that splits into a horizontal Y. In the Y is a black isosceles triangle bordered by narrow yellow bands. The red and blue bands are separated from the green band by narrow white stripes. The flag colors do not have any official symbolism, but the Y stands for the "convergence of diverse elements within South African society, taking the road ahead in unity". The colors black, yellow, and green are found on the flag of the African National Congress. The colors red, white, and blue are the colors in the flags of the Netherlands and the United Kingdom whose settlers ruled South Africa during the colonial era.

The South African flag is the only national flag to have six colors as part of its primary design. 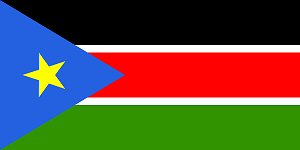 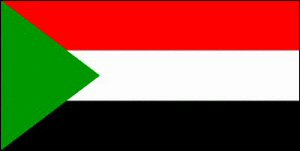 The flag of Sudan was adopted on May 20, 1970. The flag has three equal horizontal bands of red (on the top), white, and black with a green isosceles triangle based on the hoist side. The color red represents the struggle for freedom. The color white represents peace, light, and love. The color black represents Sudan (in Arabic "Sudan" means black). The color green is the color of Islam, agriculture, and prosperity. 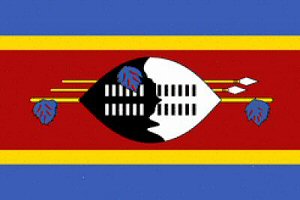 The current flag of Swaziland was adopted on October 1, 1968. The flag has three horizontal bands of blue (on the top), red (three times as wide as the other stripes), and blue. The red band is edged in yellow. Centered in the red band is a large black and white shield covering two spears and a staff decorated with feather tassels. The color blue represents peace and stability. The color red represents past struggles. The color yellow represents the mineral resources of the country. The shield, spears, and staff represent protection from the country's enemies. The black and white of the shield represent black and white people living in peaceful coexistence.