The plot is that, around the time of World War II, enemies attacked the world, starting with Russia and moving westward through Europe and England. In the 50s, the US launched a counter-attack, landing in England. You're fighting, at least to start with, with WWII era weapons and outfits through the streets of England. 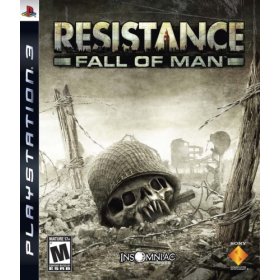 Let's start with the graphics. The game goes for a very Call of Duty style of look - not quite realistic, more "cartooney" or stylized. Textures are smoothed out, some objects are simplified. That's not to say this is a Disney kiddie look. The monsters are grimey and nasty looking, the war-torn streets are very gritty. If anything, because this is set in a WWII type atmosphere, much of the game is brown, grimy and shell-shocked.

The HUD is reasonably well done and not intrusive. A small series of bars on the left indicates your health. An equally small but useful display on the right tracks your ammo, magazines and grenades.

The sound leans towards epic thundering scores, a la Gladiator or Conan. Players who love heavy rock music might not enjoy this, but I actually love this kind of music. I own both of the soundtracks I mentioned :). So to me, this really draws you into the atmosphere. The yells, gun noises and so on seem relatively realistic to help you feel you're really in the middle of a fight. I also like that, during gameplay, it's usually done without music. If I'm trying to sneak somewhere and listen for enemy movement, I don't want that objective made difficult by a soundtrack.

Gameplay itself is typical FPS fare. You can crouch, jump over things, zoom in on your enemy, throw grenades, strafe, and so on. Your friends and enemies are rather good about taking cover and not just rushing an enemy head-on. There are a few situations which seem quite scripted - if your pals are meant to die, you could play perfectly and take out every enemy quickly and your friends will still be killed by mysterious off-screen snipers. Still, the game needs to keep you on course for the plot so this is to be expected.

Checkpointing is reasonably good, although sometimes it sends you further back then you might like to start again. Healing is done via canisters you find, but depending on your skill you might wish there were more canisters scattered around :). That's why they have 3 levels of difficulty here.

The interactivity with your environment is pretty impressive. Say your enemy is hiding behind a car. You can shoot out the car's windows and then shoot the enemy through the open space. Or you can shoot the car to damage it, and have it explode a la the infamous 'red exploding barrels' found in most shooting games. If you shoot at a window a few times, it will first crack, then pieces will fall out.

Not only is the game great in single player mode, but you can play co-op with a friend at your home, or online in larger groups with friends or strangers from around the world. This helps turn the game from a play-for-a-few-months-at-home style game to a play-eternally-with-friends-online game.

Screenshots from Resistance Fall of Man