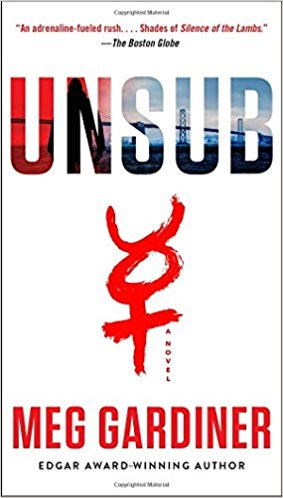 Caitlin Hendrix has only been on the job as a narcotics detective for six months. However, since her father was the lead detective on several cases involving The Prophet, a serial murderer who left the sign of mercury at each murder scene, she is quite familiar with the unsolved cases. Her father deems himself a failure for not solving the cases, and Caitlin lives with shame because The Prophet was never caught. The case ruined her father – she suspects it led to some kind of mental illness, and her relationship with him is strained. However, when The Prophet resurfaces 20 years after the last murder and starts another murder spree, Caitlin is assigned the case because she has access to her father and his knowledge of the crimes. Such is the background in the novel, Unsub by bestselling author, Meg Gardiner.

Gardiner has already established herself as an excellent writer and storyteller, and Unsub is no exception. Gardiner is experienced in building suspense, and there is plenty in this novel. The characters are well-developed, especially the main protagonist, Caitlin and also the murderer.

While the book follows what would be considered typical thriller protocol, it is fairly predictable in the scenarios leading up to the dénouement. However, there are enough twists and turns to keep the interest of readers, and with the promise of another book in the series soon coming out, there is an incentive to pay close attention to what is happening.

Although Unsub isn’t going to win any awards, it is a viable thriller and will definitely keep readers interested through to the end. Gardiner is an established author and those who like her style won’t want to miss anything that she writes.

The Spy Among Us Book Review