Richard Smallwood an Agent of Change 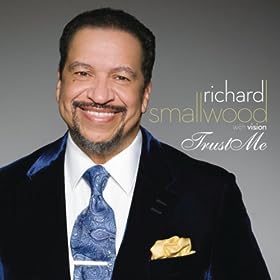 We all know about the great music of Richard Smallwood, think Total Praise, but one thing I bet many people don’t know is that he was a radical, militant, upstart college student back in the day. I’m talking an Afro and dashiki wearing brother who defiantly took over the Fine Arts Building at Howard University and demanded that the Dean allow him and his fellow music students the right to study all types of music. Yeah it was Smallwood and a band of students who locked up the place and didn’t leave for a week until their demands were met. ‘We took it over because really there were no black studies for music students. I mean we learned about Negro spirituals but jazz, blues and Gospel were not taught at the school and were not accepted,” says Smallwood. “The school focused mainly on classical music. We had approached the Dean about getting some black studies and he said no. So we decided we would take over the building.”

They moved a piano from the basement to the third floor so people could play it and refused to let anyone in or out of the building. “Oh we would take breaks and go and get lunch or something but for the next four or five days we stayed at the Fine Arts building," Smallwood says with a chuckle. Finally they had a meeting with the Dean and he agreed to allow them to have a jazz band and to study the history of African American music. This was one of many times that Smallwood was an agent of change and he has been that every since.

At an early age Smallwood would be one to adapt to change. He was born in here in Atlanta but soon moved to Philadelphia, New Jersey and various other cities because his father was a traveling evangelist. This constant moving around made Smallwood childhood difficult, “I didn’t like it because you are constantly changing schools, losing friends and I was a very shy kid so it took me a while to make friends. By the time I made friends then they (his parents) were taking me out of school and moving me to another place. Plus I was an only child so that was hard for me.”

The love of music was the one thing that was stable for Smallwood. Seeing the gift of music in her young son, Smallwood's mother brought him a toy baby grand piano at the age of two. “They (his parents) use to hear me humming melodies from church before I even started talking,” says Smallwood. At the age of five he could pick out complete melodies on the piano and at seven he played for his church and directed his senior choir. “My dad told me I want you to play for church and that was that” laughs Smallwood. He went on to form his first singing group at the age of 11 and around the age of 14 he took lessons at Howard University for the Junior Preparatory Department. He had one particular teacher, Mrs. Ann Burrell, who taught him how to read music. In the end it was his mother and father and their support that really nurtured his talent and allowed it to grow. “My parents were very encouraging especially my mom. She was an extraordinary woman.”

His latest CD Promises was birth out of a change of sorts for Smallwood; the deaths of his dear friend Walter Hawkins and his beloved mother, Mabelle Smallwood. Through Promises he wants to let people know that God can change even the most traumatic situation, like the loss of a loved one, to something that will in the end help you to be a better person and grow closer to Him. “This is the first music that I have written since my mom passed,” says Smallwood whose mother passed in 2005. “I’m more excited about this than I have been about anything in my life. For about four years after her death I didn’t write anything at all. Really I started to think; well maybe I just don’t have it anymore. When you lose someone it changes everything. I mean for a year I didn’t play any music,” adds Smallwood. He began to write again after watching the news and realizing there was no talk of good news on television. “God spoke to my spirit and said I have given you prophecy in my word so it doesn’t matter what the world says or what the media says you have to believe in my promises. If you are my child those promises will be yea and Amen. It will not return void. If I said it then that settles it.”

He decided to create a new project that would be full of songs that speak about the promises of God and that would uplift everyone who listened to it. “The music is very close to me. I have a song called “Sow in Tears” which refers to the passage that says that you sow in tears but reap in joy. A lot of the songs are about loss but how we can be mended from it by God. In fact I have a song called “He’s a Mender of Broken Hearts” which I wrote on the morning of the transitioning of my good friend Bishop Walter Hawkins. I have known Walter and Edwin since I was 19. I met them when I was at Howard. His death was sad for me but I knew God would mend my heart. So a lot of this music is encouraging music for those who have had a loss to let them know that this too shall pass,” states Smallwood.

Smallwood says he has had a full life and career. He credits the first time he heard his song “I Love the Lord” on the radio, taking his mother to the Grammy’s, assembling the singers for Vision and creating Promises as some of the best moments of his life. His music has been performed even as far away as Japan, a city he loves to visit. “I went there and a women’s choir performed Total Praised and I cried because it was so beautiful,” states Smallwood. In light of the recent tragedy in Japan, I think his CD Promises would be one that would soothe so many hurting hearts there.
You can learn more about Richard Smallwood on Facebook at www.facebook.com/richwoodmuzik